At Oscars, Joe Biden and Lady Gaga Failed to Save The Hunting Ground from Obscurity

Misleading documentary about campus rape goes down in flames 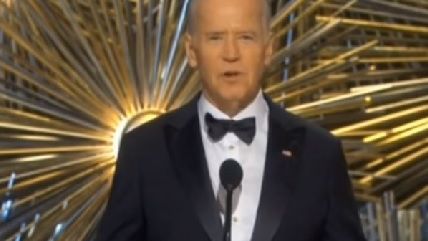 Perhaps now we can finally relegate The Hunting Ground—a misleading documentary about the campus rape crisis—to the ash heap of history.

The film failed to secure the "Best Original Song" award at the 2016 Oscars, the sole category in which it was nominated. The loss came moments after Lady Gage performed the song—"Until It Happens to You"—which featured survivors of sexual assault taking the stage.

Lady Gaga was introduced by none other than Vice President Joe Biden, who stressed the need for bystanders to intervene in situations where it seems a sexual assault is about to occur: the message of the White House-sponsored "It's On Us" campaign.

There's nothing wrong with educating people—particularly young people—about the importance of consent. It's also not wrong to ask people to intervene in dangerous situations.

But The Hunting Ground's approach has been to scare people into believing that colleges are uniquely dangerous places for women—that serial sexual predators are roaming campuses and attacking them. The scientific support for this notion has gradually collapsed, and the specific details of the cases the film highlights are now in serious dispute. But no development could persuade the film's activist producers that they had gotten the story very, very wrong. In fact, they have accused their critics of defending "white male power," even though many of the students railroaded off campuses by these activists are black.

Given such willful ignorance of the truth, perhaps it's simply time to start ignoring The Hunting Ground. The Academy deserves credit for doing the same.