But will it matter? 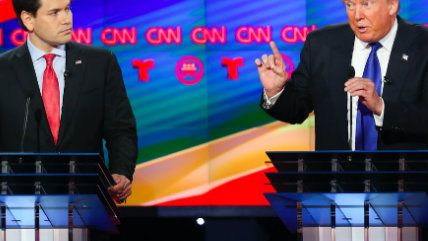 Donald Trump has led the GOP field by appearing strong. Will moments of weakness in last night's GOP debate be his undoing?

There were exchanges in last night's Republican presidential showdown in which Donald Trump seemed to take as much heat as he delivered, and even, on occasion, to come out on the losing end of a squabble. The biggest and most important of those moments tonight involved Trump's answer to a question about health care.

Trump responded, as he often does, by saying that he would repeal and replace the president's health care law, and that "we have to get rid of the lines around the states"—which seems to be a weird way of saying that he would allow the purchase of health care across state lines, although it's not clear that Trump actually knows this is what it's supposed to mean.

Marco Rubio interjected to say, correctly, that Trump clearly has no idea what he's talking about on the topic, and that he has no real plan to replace health care.

The two then went back and forth for a little while, with Rubio talking up his sketch of a replacement plan, and pressing Trump to provide more specifics. Trump, of course, has no specifics, and so could offer none, but he came back at Rubio for having a "meltdown two weeks ago with Chris Christie," referring to a moment in which Rubio repeated himself over and over again during a heated exchange with the New Jersey governor. His response, essentially, was to ignore the question and portray Rubio as weak.

And then the two sparred and interrupted each other and crosstalked some more, with Trump repeatedly going back to his line about removing the "lines," until finally it came down to this:

TRUMP: … You get rid of the lines, it brings in competition. So, instead of having one insurance company taking care of New York, or Texas, you'll have many. They'll compete, and it'll be a beautiful thing.

RUBIO: So, that's the only part of the plan? Just the lines?

In this moment, Rubio landed perhaps the biggest blow of the night—not because he had demonstrated that Trump knew nothing about health care policy (which is true, but irrelevant), but because he had made Trump, the domineering dealmaker, look like a buffoon, as weak and repetitive as the opponent he'd attacked just moments earlier.

The question is whether this moment will matter to Trump's supporters, and if so, whether it will matter enough to stop him from winning the nomination. Trump, who has won three state nominating contests already, is the frontrunner and the most likely winner of the GOP nomination, leading Rubio, who has yet to win a single state primary, nationally and also in his home state of Florida.

I don't pretend to know the answer, and if I had to guess, I would say that it probably won't matter much at all. Perhaps it is simply too late. Perhaps more of these moments earlier in the primary would not have mattered either. Trump's success is so unusual that it is difficult to know.

But if any debate moments might still make a difference at this point, it will be moments like this one, which make Trump look not only unprepared to be president, but like a stuttering fool who cannot even stand up to the likes of Marco Rubio.