Yesterday was a win for adult entertainment, sure, but also for personal liberty and against an overreaching nanny state. 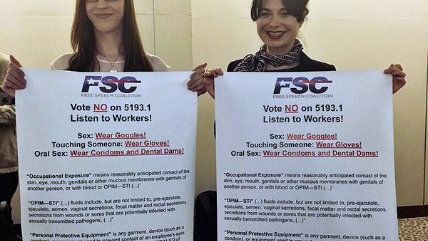 In short, performers testified yesterday, the condom proposal—part of a coordinated anti-porn effort from activist Michael Weinstein and his Aids Healthcare Foundation (AHF)—wouldn't just cost California tons in lost revenue, it would cost them their community, their safety net, and possibly their livelihoods.

After more than four hours of testimony before the Cal/OSHA Standards Board yesterday, the line of porn-industry folks waiting to speak out against the Weinstein proposal was still formidable. The mood among them, as evidenced by their Twitter commentary, was both proud and tense. On the one hand, how could board members refuse to listen to the reasoned, heartfelt, and intelligent testimony given all afternoon? How could they overlook the opposition of so many whose lives would be directly affected, as well as the people—a Centers for Disease Control and Prevention expert, a St. John's Infirmary representative, an epidemiology professor—who knew best and still said this proposal was the worst?

As testimony wound down, two Cal/OSHA board members said they would like more time to review and possibly revise the proposal. One, Dave Harrison, told the crowd he was "actually more torn over this than I can ever explain." Board member Robert Blink concurred: "I'm going through similar mental gyrations over this," he said. A motion to postpone the vote failed, however, and the five board members went ahead with the process. Four affirmative votes were required to pass the Weinstein proposal and add a new section to the California Health Code.

Only three board members voted yes.

Board member Patty Quinlan said the issue would be reconsidered in the future "with more input from the affected industry."

The room erupted in cheers as the news was announced, and social media in tiny victory speeches. "I can't believe it's real life but…WE WON!" wrote sex columnist and adult performer Siouxsie Q on Instagram. "Fucking. Awesome. A wonderful victory, thank you to all the people who spoke today," tweeted cam girl Alex Coal.

"Now we face a larger battle, which would seek to replicate and amplify the worst parts of the regulations," said Leue. "In fact, the ballot initiative, allows private citizens to sue adult performers who do not use condoms, and would drive a legal industry underground where performers would be less safe. This idea — that private citizens can sue adult performers because of actions they disapprove of is outrageous, and would not be permitted in any other sector of our society. We will fight this, and this too, we will win."

In a press release, Weinstein said AHF is "disappointed" by Cal/OSHA's decision and "are announcing today that we will immediately file a new petition with Cal/OSHA on this important health measure."