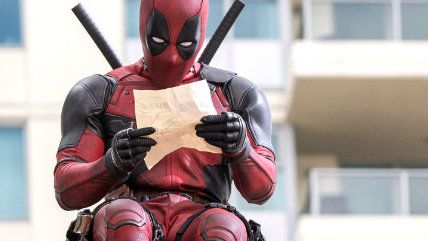 Deadpool, an outrageous, over-the-top, defiantly vulgar movie about Marvel Comics' wise-cracking, foul-mouthed mercenary hero, made a killing at the box office this weekend, smashing multiple records, including biggest opening for an R-rated film ever (a record previously held by The Matrix Reloaded).

Depending on how it holds up over the next few weeks, it could become the highest-grossing R-rated movie of all time.

Naturally, there's already a move to copy its most identifiable difference from contemporary superhero movie tradition: its R-rating.

A sequel has already been given the greenlight, and Fox, which owns the rights to the X-Men franchise that Deadpool is part of, has already indicated that the next solo Wolverine film, due next year, will also be rated R. Don't be surprised if you see a lot more R-rated superhero films put in the pipeline.

In some ways it's a little surprising that it took this long for studios to figure out that there's a market for R-rated hero films. After all, as I note in my column for Vox this week, one of the earliest films of the modern superhero era was Blade, an R-rated take on one of Marvel's grittier, less-known characters. Here's a snippet:

Deadpool's clearest divergence from the mainstays of the superhero film comes from its R rating, which is uncommon in a genre that tends to stay pretty strictly within the maximally accessible bounds of the PG-13 rating. And that in itself is a reminder that part of the genesis of the modern wave of superhero films was in an R-rated comic book adaptation: Blade.

Released in August of 1998, Blade wasn't sold as a comic book movie so much as an effects-driven supernatural action film and a star vehicle for the particular talents of its lead actor, Wesley Snipes. And why would it have been?

Aside from the struggling Batman franchise, which at the time was plumbing the depths of cornball irony under the direction of Joel Schumacher, superhero movies weren't really a going concern in Hollywood. Rumors of big-budget comic-based films had circulated for years (James Cameron even wrote a script for a Spider-Man movie), but by the late '90s, comic books themselves increasingly looked like a fad that had passed. The comic book sales bubble that peaked earlier in the decade had popped, with newsstand sales effectively nil and the entire market reduced to a relatively small number of specialty shops. Less than two years earlier, at the end of 1996, Marvel Comics, where the Blade character originated, had filed for bankruptcy.