Peter Tatchell snubbed for signing onto letter opposing elimination of platforms for debate. 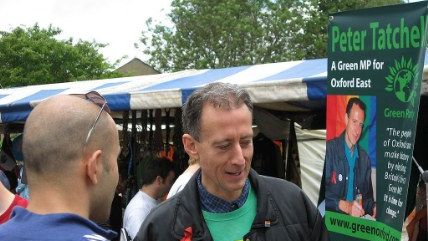 Peter Tatchell is one of the most prominent and vocal gay rights activists in England, participating in causes and actions going back to the 1970s. He famously attempted a citizen's arrest of extremely anti-gay Zimbabwe President Robert Mugabe when the leader was visiting London. He was actually attacked and injured by Mugabe's guards during a second attempt to arrest the man in Brussels in 2001. He has a lengthy history of support for LGBT causes, peaceful causes, and all sorts of left-leaning positions.

But he signed a letter opposing behavior by students in colleges in the United Kingdom who were attempting to deny the ability of speakers to discuss ideas with which they did not agree, so screw him. If Tatchell doesn't support driving out speakers who hold unpopular views, then he shouldn't get to speak either. So the argument apparently goes. Tatchell is supposed to give a speech today at Canterbury Christ Church University on "re-radicalizing queers." But his support for open platforms for free speech are not queer enough for the National Unions of Students' LGBT rep. From The Guardian:

In the emails, sent to the organisers of a talk at Canterbury Christ Church University on Monday on the topic of "re-radicalising queers", Cowling refuses an invitation to speak unless Tatchell, who has also been invited, does not attend. In the emails she cites Tatchell's signing of an open letter in the Observer last year in support of free speech and against the growing trend of universities to "no-platform" people, such as Germaine Greer, for holding views with which they disagree.

Cowling claims the letter supports the incitement of violence against transgender people. She also made an allegation against him of racism or of using racist language. Tatchell told the Observer that the incident was yet another example of "a witch-hunting, accusatory atmosphere" symptomatic of a decline in "open debate on some university campuses".

One of the founding members of direct action group OutRage!, which caused a storm in the 1990s by outing establishment figures it claimed were homophobic in public and homosexual in private, Tatchell is used to being in the establishment firing line. But the original radical queer is now finding himself having to think long and hard about free speech.

It is interesting that Tatchell is now having to think about free speech. You see, Tatchell has not exactly been a purist on free speech issues. He has been a major force behind opposition to the anti-gay lyrics of Jamaican dance hall music, a fight that was world news for a time back in the early part of the new millennium. A lot of the activism was a perfectly normal example of fighting bad speech with more speech—protests and calls for boycotts and attempts to apply social pressure to create change. But Tatchell also got British police involved in investigating the lyrics and shutting down concerts, arguing that the calls for violence with the lyrics were dangerous.

Now though, things have changed. Or perhaps Tatchell has at least found some nuances. Tatchell recently took a position on a bakery in Belfast that has been found guilty of anti-gay discrimination for refusing to write "Support Gay Marriage" on a cake because the message violated the baker's religious beliefs. Tatchell's position is in support of the bakery, not the customer. He originally condemned the bakers, but announced a change of position at the start of the month. He explained in The Guardian:

The judge concluded that service providers are required to facilitate any "lawful" message, even if they have a conscientious objection. This raises the question: should Muslim printers be obliged to publish cartoons of Mohammed? Or Jewish ones publish the words of a Holocaust denier? Or gay bakers accept orders for cakes with homophobic slurs? If the Ashers verdict stands it could, for example, encourage far-right extremists to demand that bakeries and other service providers facilitate the promotion of anti-migrant and anti-Muslim opinions. It would leave businesses unable to refuse to decorate cakes or print posters with bigoted messages.

In my view, it is an infringement of freedom to require businesses to aid the promotion of ideas to which they conscientiously object. Discrimination against people should be unlawful, but not against ideas.

This isn't taking it as far as defending (philosophically) the right for singers to wish death upon gay people, but baby steps.