How can we believe that the media is fairly covering the Clinton campaign? 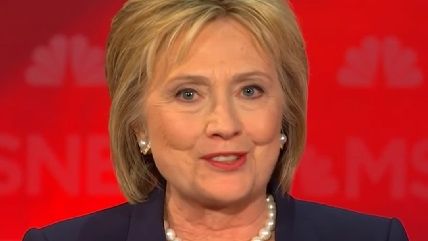 That's the undeniable takeaway from this Gawker piece, which proves beyond any doubt that at least one prominent journalist—and probably more—traded favorable coverage for early access to Clinton's speeches. They even allowed a Clinton staffer to dictate exactly what would appear in the finished articles.

In 2009, Marc Ambinder, formerly a contributing editor of The Atlantic, emailed Clinton spokesperson Philippe Reines for an advance copy of the speech the then-secretary of state planned to make at a Council on Foreign Relations event. Reines emailed back with a few conditions: Ambinder had to describe the speech as "muscular," and he had to take a dismissive view of the seating positions of some of her rivals. Reines also wrote: "Don't say you were blackmailed!"

Ambinder emailed back "got it." He complied fully. Here was the first paragraph of his article about the speech (emphasis Gawker's):

When you think of President Obama's foreign policy, think of Secretary of State Hillary Clinton. That's the message behind a muscular speech that Clinton is set to deliver today to the Council on Foreign Relations. The staging gives a clue to its purpose: seated in front of Clinton, subordinate to Clinton, in the first row, will be three potentially rival power centers: envoys Richard Holbrooke and George Mitchell, and National Security Council senior director Dennis Ross.

Gawker notes that POLITICO's Mike Allen also used the word "muscular," and is known to have promised favorable coverage of Chelsea Clinton.

Ambinder, who is now editor-at-large of The Week, defended himself weakly before finally admitting, "It made me uncomfortable then, and it makes me uncomfortable today." That's putting the matter too mildly—it should make him feel deeply ashamed. Mere discomfort is not enough for someone who knowingly and brazenly compromised his ethical obligations as a journalist.

Opinion writers are entitled to have biases, but there's a fundamental difference between writing a pro-Clinton piece and writing a piece that was literally dictated by Clinton's staff. A journalist who does the latter isn't even a journalist: he's a propagandist masquerading as a legitimate news source.

I wonder how many other writers with broken ethical compasses are shilling for Clinton—under the guise of actual journalism—even as we speak.