Veterans may not now have a choice of where to go for health care. But they will have a choice in November's election, as we all will. 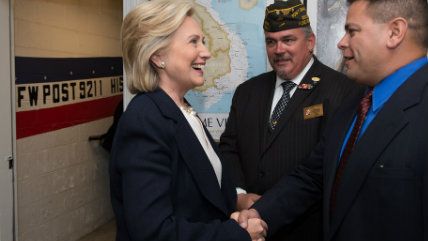 The presidential campaign issue of veterans health care is worth keeping a close eye on, even if you aren't a veteran or a close family member of one. The matter came up at both of the two most recent presidential debates. It's in the news not only because of the scandal over long wait times for care at Veterans Administration hospitals and the coverup of the same scandal, but because the differences between Republicans and Democrats on the issue illuminate a stark ideological divide.

Here's how the Democratic presidential candidates dealt with the question when they were asked about it on February 4 by Rachel Maddow, who put it this way: "What's your argument that the V.A. should still exist and should not be privatized?"

Hillary Clinton responded, "I'm absolutely against privatizing the V.A. … this is another part of the Koch brothers agenda. They've actually formed an organization to try to begin to convince Americans we should no longer have guaranteed health care, specialized care for our veterans."

Said Clinton: "I will fight that as hard as I can. … let's fix the V.A., but we will never let it be privatized, and that is a promise."

Sen. Bernie Sanders, a past chairman of the Senate Committee on Veterans' Affairs, replied, "Secretary Clinton is absolutely right, there are people, Koch brothers among others.. who want to privatize it…. We've got to strengthen the V.A. We do not privatize the V.A."

On February 6, the Republican presidential candidates dealt with the same question in their own debate. Even though the Republicans were clashing with each other on some issues, on this one, there wasn't much of a debate. It was more of a consensus.

Benjamin Carson said that veterans "should have health empowerment accounts that are subsidized so they can go to any medical facility and be taken care of. They can go to a V.A. if they want to."

Jeb Bush said, "I totally agree that we need to give veterans more choices. A veterans card to be able to go to a private provider will enhance the quality of the service inside the Department of Veterans Affairs."

John Kasich said, "when a veteran comes home, they should get health care anywhere they want to go."

The difference between Republicans and Democrats on this issue might indeed have something to do with interest group politics. Non-government doctors, health insurance companies, and for-profit hospitals—often, though not exclusively, aligned with Republicans—would surely like a piece of the roughly $60 billion a year that the federal government spends providing veterans health care through dedicated, government owned and operated Veterans Administration health care facilities.

On the Democratic side, the American Federation of Government Employees, a reliable Democratic interest group, represents 220,000 employees at the Veterans Administration. The union doesn't want those employees to lose their jobs to non-union private sector competitors.

But while the interest-group politics around the issue can't be ignored, neither can the underlying ideological differences. Veterans health care is not the only issue where Democrats want a service provided by unionized government employees, while Republicans want to give individuals a choice. The same pattern shows up in education, where most Democrats favor traditional public schools while most Republicans are more open to private school vouchers. The analogue in housing policy would be government-owned housing projects versus rental subsidy vouchers that can be used to pay private landlords. The Democrats haven't yet abandoned food stamps for a program of forcing the poor to shop at special government-owned grocery stores selling food grown by unionized government farmers on government-owned farms, but wait for the second term of the Sanders administration.

Republicans don't trust the government; they think it's a bloated monopoly run by overpaid, inefficient bureaucrats. Democrats don't trust the private sector; they suspect overpaid corporate executives just want to siphon excessive profits out of government programs. Neither party is perfectly consistent about this; there are some social issues where Republicans aren't so comfortable with individual choice, and some Democrats don't mind portraying the Pentagon as a bloated, inefficient bureaucracy. But these are the fundamental instincts and tendencies, and they run deeply.

Businesses facing similar questions of whether to contract out services or perform them in house can run though a checklist. Is the service part of the company's core mission? Is the benefit of control gained by performing the service in-house worth the increased cost or hassle? Which will provide the best combination of price and service, an in-house provider or an outside contractor?

Politicians have to rely on guidance from the Constitution and, one hopes, from the voters, or the individuals receiving the services. Veterans may not now have a choice of where to go for health care. But they will have a choice in November's election, as we all will.