With LaVoy Finicum's funeral being held today, Utah police are on the lookout for "armed extremists." What sort of advice are they getting?


Funeral services will be held today in Kanab, Utah, for LaVoy Finicum, the rancher killed last month during the occupation of the Malheur Wildlife Refuge in Oregon. In a bulletin distributed this week to cops across the region, the Utah Statewide Information and Analysis Center—one of the dozens of intelligence-sharing "fusion centers" around the country that get funds from the Department of Homeland Security—warns that "extremists may utilize such a high profile funeral for media attention or to further ideological beliefs." 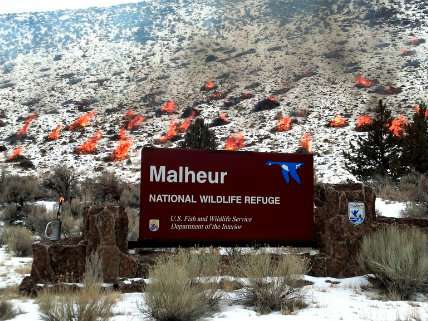 Although "no credible threats to law enforcement are present at this time," the authors still think police should be wary: "Caravans of individuals traveling to the funeral services may be comprised of one or more armed extremists. Law enforcement should remain vigilant and aware that confrontation with these potentially volatile persons, may include more than one individual. These individuals may adhere to a sovereign citizen ideology, and may not recognize law enforcement as a legitimate authority."

The report includes several "visual indicators" to help police determine whether they're dealing with "extremist and disaffected individuals." These range from images associated with specific political groups, such as the Oath Keepers and Three Percenters, to a more generic patriotic symbol, the Gadsden flag—a famous Revolutionary War banner featuring a coiled rattlesnake and the slogan "Don't Tread on Me." One of the "indicators" is a slightly altered version of a picture popular with fans of the Grateful Dead; the guide does not note this potential source of confusion, describing it only as "common sovereign citizen imagery."

Although "some or parts of these symbols are representative of patriotic and American revolutionary themes," the report says, "they are often associated with extremism." There is little effort to apply even that much nuance to the individual symbols. The Gadsden flag is associated with several political movements, such as the Tea Party protests; it has also been adapted by apolitical subcultures, such as the fans of U.S. Soccer. But the bulletin simply declares that it is "commonly displayed by sovereign citizen extremists."

One private-sector security professional who received the bulletin worries that it could lead to a kind of profiling. "I work with a young man, 24 years old, three associate's degrees, volunteer fire fighter, dreams of becoming a police officer," he says. "He's also an Armenian-Russian immigrant who just earned his American citizenship. He sports a Gadsden flag on his car because of what it represents in our country's history." If a cop sees that car today, the security worker worries, the officer's "thoughts will automagically flip to profiling him" as a violent extremist.

Mike German, a former FBI agent who infiltrated far-right groups in the 1990s, has a similar objection. "I always try to look at these alerts from the perspective of the police officer on the street," he says. "What will the officers know after reading this that they didn't before? Here all they know is to be afraid if they see a Gadsden flag, which could result in an unnecessarily hostile encounter that would increase the chances of violence. There's nothing here that would help them correctly identify someone who held these beliefs, understand what might trigger hostile reactions, or how to talk to them in a way that would defuse any unnecessary tension." He also worries that the bulletin "improperly implies holding such beliefs makes them dangerous"; most of the people involved in these movements are nonviolent, he says, and treating them all like budding terrorists just makes a confrontation more likely.

German, who is now based at New York University's Brennan Center for Justice, thinks it's "perfectly reasonable for the fusion center to make law enforcement aware of the situation regarding the Oregon standoff and police shooting, and how the upcoming funeral might make those out-of-state events more pertinent to local enforcement needs and officer safety." But he feels the report's approach "is unhelpful because it is overgeneralized in describing a threat and lacking in any useful advice. It seems almost like CYA, so they can say 'we warned 'em' if anything bad happens."

The Statewide Information and Analysis Center has not responded to my requests for comment. To read the full bulletin, go here.