Here's What Rand Paul Is Saying About Leaving the Presidential Race 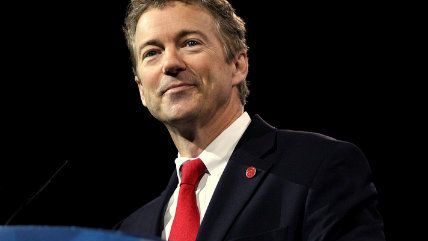 Rand Paul announced today that he's suspending this campaign for the presidency. And in a just-released video statement, he issued his thanks to supporters and said farewell to his campaign, while declaring his intention to continue focusing on signature issues like criminal justice reform, privacy, and size of government.

Among other things, Paul promised that he would "continue to be a voice against the out of control regulation, spending and debt that is crippling our country's economy and the future of our children," and that he would "not ignore the terrible cost of decades of war and chaos in the Middle East, and the unintended consequences of regime change and nation building."

Rand Paul was once considered a promising contender for the GOP presidential nomination. A year ago, headlines suggested that he might even be the frontrunner. But Paul's campaign has fallen short of those hopes, and after finishing a disappointing fifth place in the Iowa caucus this week, Paul announced that he would cease campaigning.

Here's a video of the complete statement. Read the full transcript after the jump.

"It has been an honor to participate in the 2016 Republican Presidential Primary.

"I am proud of our principled campaign and the thousands of young people that have been energized by our message of limited constitutional government.

"Ours has been a unique voice in this race—one that says Big Government threatens Americans from all walks of life, rich and poor, black and white—from the coal miner who has lost his job over President Obama's destructive EPA regulations…  to the teenager from a poor family facing jail time for marijuana.   I will continue to fight for criminal justice reform, for privacy, and your 4th amendment rights.  I will continue to champion due process over indefinite detention.

"I will continue to be a voice against the out of control regulation, spending and debt that is crippling our country's economy and the future of our children.   I will not ignore the terrible cost of decades of war and chaos in the Middle East, and the unintended consequences of regime change and nation building.  I will never forget the thousands of American soldiers who have given their lives—and the thousands more who live everyday with catastrophic injuries.

"These are the issues that have defined my campaign.  Kelley and I are deeply grateful to our outstanding staff and tireless volunteers and supporters—people who believe in liberty.  It has been a privilege to give voice to the liberty movement in this race and I believe we have broadened the debate by being part of it.  Although today I will suspend my campaign for the Presidency, I will continue to fight on for liberty, for the Constitution, and for justice in the United States Senate.   Thank you, and God Bless America."