Dilbert creator explains why Trump is so effective at dismantling his opposition. 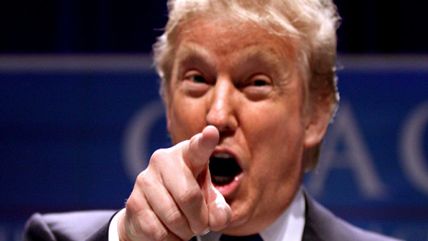 This week, the conservative National Review (NRO) published a collection of anti-Donald Trump pieces aimed at taking down the Republican presidential frontrunner. (Read Matt Welch's coverage on the issue here.)

Trump of course took to Twitter to respond to NRO, calling the magazine a "failing publication":

National Review is a failing publication that has lost it's way. It's circulation is way down w its influence being at an all time low. Sad!

NRO is not the first to come at Trump, and it's dubious to assume their anti-Trump position will do anything to affect his lead in the polls just weeks before the primaries commence with the Iowa caucuses.

Trump's ability to weather criticism and dismantle his detractors has become a case study in campaigning—the more negative news and insults that come his way only help to raise his poll position.

In the video below, Dilbert comic creator Scott Adams thinks he knows why Trump has been able to escape criticism and explains why The Donald's skills at manipulation will win him the GOP nomination.

Donald Trump has a way with words—and with people. Yet despite his popularity, he has been a mystery to the media, which have mostly derided his campaign as consisting of nothing more than random insults and ignorant bluster.

Scott Adams, prolific author, blogger, and creator of the massively popular comic strip Dilbert, has a different theory. He tells Reason TV's Zach Weissmueller that the media are being trolled by a skilled manipulator, or in Adams's parlance, a Master Wizard. So exquisite does Adams believe Trump's skills to be that he predicts The Donald will go on to win the presidency.

"What I [see] in Trump," says Adams, is "someone who was highly trained. A lot of the things that the media were reporting as sort of random insults and bluster and just Trump being Trump, looked to me like a lot of deep technique that I recognized from the fields of hypnosis and persuasion."

One such technique is what Adams describes as a "linguistic kill shot," in which Trump uses an engineered set of words that changes or ends an argument decisively. According to Adams, when Trump describes Jeb Bush as low energy, Carly Fiorina as robotic, or Ben Carson as nice, he's imprinting a label you already feel about these people. They're not random insults, but linguistic kill shots that you can never get out of your mind.

Similarly, where the media see random insults, Adams sees Trump creating a significant polling gap between those who attack him and those who compliment him, resulting in chilled aggression from his opponents. Trump, says Adams, uses "anchors," which are big, visual thoughts that drown out any other argument. Think, for example, of the billionaire's florid descriptions of a Mexican border wall.

Adams also describes Trump's use of "linguistic Judo," vagueness, and a carefully developed persona to defend himself against attack and promote the image he desires. "You see apple pie and flags and eagles coming out of his ass when he talks," says Adams.