Gunman Tries to Kill Cop in West Philly 'in the Name of Islam,' Mayor Calls for More Federal Gun Control 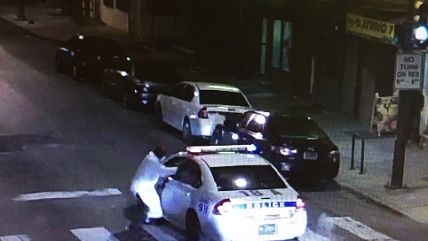 Last night, Edward Archer tried to kill a police officer in West Philadelphia by firing 13 rounds into his car, striking him three times in the arm in what police call an "attempted assassination."

"This guy tried to execute a police officer," said Philadelphia's new police commissioner, Richard Ross. "The police officer had no idea he was coming. It's amazing he's alive."

The suspect was apprehended and reportedly made a full confession. The Washington Post reports:

Ross said during a later news conference that the suspect confessed to the shooting and said he did it "in the name of Islam."

Police also said that the attacker told authorities he pledged allegiance to the Islamic State, the militant group that has declared a caliphate in parts of Iraq and Syria.

The gun used in the shooting was a stolen police firearm, Ross said.

Police have not mentioned a specific motive and won't yet say if they're investigating the incident as terrorism.

Among the newly-inaugurated mayor of Philadelphia Jim Kenney's first comments about the attack were that "there are just too many guns on the streets and I think our national government needs to do something about that," as reported in a Christian Science Monitor piece about using the shooting as part of the "national conversation" about guns.

The district attorney, Seth Williams, also appeared to use the attack to push his agenda on guns. "This shows us the need for smarter laws when it relates to guns on the street," Williams said. "My office is going to do all that we can to ensure the defendant is held accountable to the fullest extent of the law."

It's unclear whether Williams will explore how the police firearm was stolen in the first place and whether anyone at the police department responsible for not getting guns stolen might face some kind of responsibility, criminal or otherwise.

President Obama's unilateral gun control measures, which are mostly aimed at law-abiding civilian buyers and sellers, do include efforts to "explore potential ways" to limit accidental discharge and "unauthorized use" of firearms owned by federal agencies, which collectively make up the country's largest firearms purchaser.

Supporters of gun control measures often hedge that it's impossible to "predict" whether any specific measure would prevent a specific crime being used to push more gun control, but that, as Attorney General Loretta Lynch said, if paperwork and patience saved even one life it would be worth it.

Controlling the guns in the local Philadelphia government's possession won't be helped by anything the national government can do, despite Kenney's pleas. Kenney doesn't have to wait for the feds to impose more paperwork on controls on police guns, and could start by getting a grasp on how many, exactly, are missing at any given time, as well as how they are used off- and on-duty.

Despite fears of a "war on cops" fueled by a desire to thwart reforms and a fatal shooting of two NYPD cops at the end of 2014, 2015 went down as one of the safest years for police in the U.S. on record. There was no crime wave either. There were, however, a string of police shootings that drew varying levels of national attention, and continue to propel a discussion on police reforms.

Of note, too, that despite Archer's proclamations that he pledged allegiance to ISIS, few people, if any, are jumping to call this an act of terror simply because of the invocation of Islam. The argument that that is what often happens in America has been one of the specious arguments advocated by some on the left to call the armed activists in Oregon "terrorists."

In this instance, it was liberal leaders themselves in Philadelphia who jumped to kickstart their civil liberties-violating political agenda off a crime that drew national attention, just as liberals would accuse supporters of a tougher war on terror of doing if (or when?) they used the attempted murder of this cop to demand more civil liberties-violating measures of their own. Welcome to 2016.