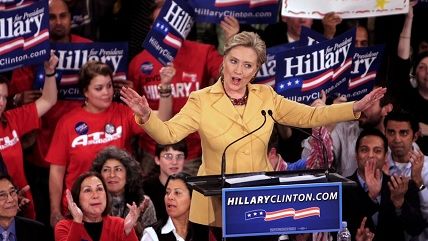 Democratic presidential candidate Hillary Clinton told a crowd in Iowa she wanted to keep American companies from moving overseas by "using their patents as leverage to make them pay their taxes," referring to companies like Apple and GE she said "were salting money away offshore."

More than a year ago, the Obama administration released a new set of rules intended to thwart American companies trying to move overseas in a process called "inversion," where a merger between an American and foreign company ends with the new parent company being non-American. President Obama and others on the left have sought to paint the process of companies migrating overseas, often to take advantage of better tax rates, as "unpatriotic" despite being legal.

In other contexts, President Obama has characterized support for restrictions on migration as un-American. The freedom to migrate has to work both ways.

When Obama announced the new rules in September 2014, Bill Clinton declined to join him in calling the process of moving your business overseas "unpatriotic" and that the U.S. should "come to terms with the fact that everyone else in the world has stopped taxing on the difference between what their companies earn in a different country and at home."

Corporate economic migrants head to places like Canada and Ireland. In other countries, we recognize closing borders to keep economic migrants in is anathema to the idea of freedom. Places like Canada and Ireland aren't bastions of government-less anarchy, and the U.S. should be able to compete with them by improving its own economic climate and not by closing borders and threatening to hold assets hostage.

Patents, of course, are government privileges. Apple, for example, has spent years in court fighting Samsung over whether the Korean company's Galaxy phones were "copies" of the iPhone. The fight hinges over such remarkable processes as swiping your finger to unlock your phone screen. In other words, it's a silly fight meant to suppress a competitor through privileges granted by government rather than by offering a superior product in an open marketplace.

As far as unintended consequences go, the ones for holding patents hostage in an almost inevitably failed effort to keep companies from seeking less repressive tax burdens may not be the worst if they encourage companies to rely less on government-granted privileges and fictions in their business models.