The U.S. government and its accomplices are waging actual war. In contrast, terrorists commit crimes. 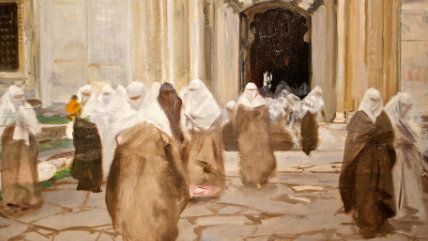 The demagogic exaggeration of the "terrorist threat," which was the centerpiece of the last Republican debates, is easily deflated with just a moment's thought. What is the chance that any particular resident of the United States will happen to be in the same place as someone who intends to murder in the name of the Islamic State, al-Qaeda, or some other cause? Less than minuscule. Many commonplace things are likely to kill you long before you encounter an Islamist, white-supremacist, or anti-abortion terrorist in the United States.

Typically, we don't find it worth the money it would take to substantially reduce those other risks. We could cut traffic fatalities considerably by outlawing left turns and reducing the speed limit to 5 MPH. But who would support those measures? So why tolerate the government's spending trillions of dollars (not to mention the violations of liberty) in its futile attempts to save us and our open society from all possible terrorism—especially when it could make us safer by spending less money and respecting our liberty through a noninterventionst foreign policy?

Of course, the assessment of the small risk would change—although not significantly, given the size of the U.S. population and land mass—if we knew that the number of would-be terrorists was growing. But we can be confident, as John Mueller and Mark. G. Stewart note, that the number is tiny. How do we know? We know because we don't see much terrorism in the United States. As Mueller and Stewart note, 9/11 was an obvious outlier and many of the foiled terrorist plots were instigated or at least advanced by FBI informants. (Attacks at military facilities should not be counted as terrorism, a loaded term coined to let the U.S. government and Israel get away with murder.) And what terrorism we've seen has not been terribly sophisticated.

Some forms of terrorism are difficult to pull off. The coordinated hijacking of multiple airplanes by men armed with box cutters (although low-tech) was no simple mission, and with (low-tech) locks on flight-deck doors it has become even more difficult. But other forms are easy if you don't mind dying or, indeed, you wish to die. It is not rocket science to come up with ways to kill lots of innocent people. Sayed Farook and Tashfeen Malik walked into a crowded office party with legally purchased firearms, killed 14 people, and wounded 22. In Israel the other day, a Palestinian drove his car into a group of Israelis waiting for a bus. That sort of activity cannot be foiled unless the perpetrators publicly declare their intentions, which, by the way, Malik did not do. Others are not likely to do so either.

If America were crawling with ISIS cells or self-"radicalized" lone wolves, we'd be seeing far more violence than we've seen. Right after 9/11, officials and analysts said they were certain a "second wave" was coming. It did not happen.

Moreover, as Mueller and Stewart point out, most would-be terrorists appear to be misfits who couldn't bomb their way out of a paper bag and wouldn't even try without goading by an FBI informant. The fear-mongering anti-terrorism complex—which consists of the government-media-"terrorism-expert" industry —portrays would-be terrorists as an invincible force of crack operatives led by "masterminds" who are high-tech wizards. (The fear-mongers would have you believe that encryption was invented by ISIS.) But the record does not support this picture. Just as the Cold Warriors had a financial and power interest in having us think the Russians were 10 feet tall, so the counter-terrorism lobby has the same interest in persuading us that "Islamists" are uniquely and diabolically cunning; they will soon be making suitcase nukes, it is intimated, and bringing them to Times Square.

Republican presidential candidates delight in saying that "we are at war." Indeed, depending on whether you count the Cold War, we're either in World War III or World War IV. Balderdash! The terrorist incidents in the West in fact demonstrate the asymmetrical nature of what's going on between the United States and its targets in the Muslim world. The U.S. government and its accomplices are waging actual war. Even if the ground force is (currently) small and remote-controlled drones are increasingly preferred over conventional bombers and gunships, the war now conducted by the West is not far removed from traditional war.

In contrast, terrorists commit crimes (torts, really) against people in the United States, France, etc. They shoot up parties, concert halls, and restaurants. It's horrible, but it's not war. ISIS and al-Qaeda have no armies capable of invading the United States, no navies, no air forces. They have no ability to conquer the country or bring down the government. In no sense can they defeat us. Only we can do that.

"We" are at war with them. They are not at war with us. The terrorism we've witnessed is resorted to precisely because they, or more precisely their domestic sympathizers, are unable to wage war against American society. Those who insist loudest that we are being warred upon understand that a government on a war footing will be permitted to exercise an intolerable degree of power over us. Presidential candidates drool over the thought of themselves as commanders-in-chief.

When Rick Santorum, echoing his presidential rivals, says that "radical Islam is on the move and their motives are to destroy the western world," he's merely vying for votes by spreading baseless fear. A few "lone wolves" do not constitute "radical Islam," and motives (even if correctly ascertained) are irrelevant when capability is lacking. Mueller and Stewart describe a "terrorist" who aspired to topple the Sears Tower in Chicago, have it slide into Lake Michigan, where it would (he hoped) create a tsunami, which would wash back on the city, and open a jail, springing the inmates. Shall we lose sleep over such plots?

As I've said before, the price exacted from Americans by the cynical anti-terrorism complex consists in lost liberty, lost privacy, lost prosperity, and needless stress. But there's another high price: the social destruction that will result from the suspicion directed at American (and other) Muslims. It's well-established that ISIS and al-Qaeda want to drive a wedge between Muslims and non-Muslims in America and elsewhere. American politicians say they don't want that to happen, but the logic of their rhetoric and authoritarian proposals cannot help but sow hostility toward all Muslims.