Donald Trump May Be a Dangerous Buffoon, But He's No Hitler

Americans worried about a future Hitler should oppose abusive executive power no matter who is president. 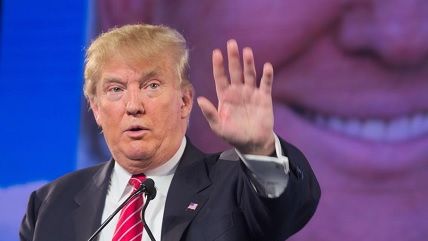 "Is this what Germany looked like in 1933?" Joe Scarborough asked on Morning Joe this week.

Though many in my family were exterminated during the Holocaust—including one of my grandfathers, who died trying to make his way home from Mauthausen after years of forced labor—I'm not completely offended by an occasional gratuitous Nazi analogy. But as much as I hate to intrude on our week of national indignation, Donald Trump's idiotic, undoable and probably unconstitutional immigration proposal (if we can call it that) is not comparable to the genocide of 6 million Jews. Trump is not comparable to Adolf Hitler. The Art of the Deal is not Mein Kampf. You can save your histrionic riffs of Martin Niemoller, for now. Trump's statist suggestions and nativist populism, though often reprehensible in their own special way, are not nearly so morally corrupt as the policies of National Socialism or Stalinism or even the theocracies that litter the Middle East right now.

Unless political demonstrations have been banned and something comparable to the Reichstag fire is about to go down, Trump is not going to be Führer. Marinus van der Lubbe may not have burned down the German Parliament, but Islamic terrorists actually did gun down a bunch of Americans last week. Yet storm troopers didn't smash Muslim businesses in a fury of collective punishment; a concentration camp for political opponents of Trump was not established this year; there's been no decree banning Muslims from practicing law and civil service jobs; and there have been no prohibitions on Islamic dietary laws. Not even Trump has claimed to want to institute any of these things—and other than a few fringy Nazi types on Twitter, I've never seen anyone claim to want to institute these things. All of them, of course, would be unconstitutional.

I realize that many liberals like to portray Muslims as an oppressed class, much like the Jews of prewar Germany. But this historical fearmongering is not backed by evidence. Rarely are religious hate crimes directed at Muslims. (Over 60 percent of them are still aimed at Jews, according to government statistics.) As of now, Muslims have not lost a single right as Americans (other than the ones we all lose). Calling for an end to Muslim immigration is more comparable to the Chinese Immigration and the Chinese Exclusion Acts (though this has nothing to do with economic protectionism) than it is to the Nuremberg Laws. Muslim Americans enjoy more individual liberty in the United States than they would in any Islamic nation.

Many Americans feel that they're under attack. Many blame all Muslims, but some won't blame Islam at all. Both are preposterous and dangerous positions. Trump's crass populism—the crassiest—feeds off this fear. It's an ugly overreaction to President Barack Obama's underreaction regarding terrorism, though there is one incredibly important distinction: Both of these men have proposed actions that intrude on the Constitution this week—with the president proposing to use an arbitrary no-fly list to take due process away from potential gun owners—but only one will ever have been president.

Trump is never going to make a decision for the American people. Neither major party will support his run for the presidency, should he somehow win the Republican nomination, which is highly doubtful. But if you don't buy all that and if you're truly concerned that Trump is going to turn America into the next Nazi Germany, there is an answer: You should become a vocal opponent of abusive executive power no matter who is president. That includes the one we have right now. Because it's the precedents we set today that would make it easier for Trump to have his own Schutzstaffel.