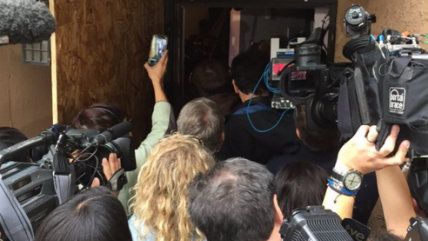 The strangest scene just unfolded live on cable news: MSNBC and CNN, along with  other news agencies, crowded into the rented apartment home of Syed Farook and Tashfeen Malik, the husband and wife who are suspected of killing 14 people in San Bernardino on Wednesday, and broadcast live from the scene as they rifled through the couple's belongings.

On MSNBC, reporter Kerry Sanders encountered children's books and toys, stacks of photos, including some of children, as well as a photo identification of someone who appears to be Farook's mother, which was shown in unredacted close-up, complete with her address.

Media crews entered the property after the landlord used a crowbar to tear off the boarding on the front door. According to CNN, the landlord gave media permission to go inside.

As the footage from inside the apartment aired, lots of people wondered whether law enforcement had authorized media presence in the apartment. And there seemed to be some confusion.

Reporters on CNN noted during a broadcast following the initial search of the home that there were some law enforcement present nearby, and they made no attempt to stop the media from going inside.

Joe Serna of the Los Angeles Times reported on Twitter that local law enforcement was uncertain about why the media had been let in, quoting a San Bernardino sheriff's deputy as saying that federal authorities "told us it's still an active investigation…I don't know why there's people in there."

But when asked about the presence of media on the scene, a spokesperson for the FBI in Los Angeles told Greg Sargent of The Washington Post that "our search is over. We released the scene yesterday." The Los Angeles Times has additionally reported that the FBI has a policy of turning properties back over to their owners following a search.

The highly unusual broadcast definitely left a lot of people upset, however, including several CNN's on-air analysts, who said that it looked like a massive failure by law enforcement to secure a critical scene in what is being treated as a possible (and at this point likely) terrorist attack. (See update below.)

I'm not entirely sure what to think about this. The interest and potential for news value seem fairly clear here. It would be extremely difficult for any news organization covering this story to turn down the opportunity to go in and examine the scene. Restraint becomes even more difficult once a competing organization has gone in.

At the same time, there's also the possibility that media presence will contaminate the scene. As one of the analysts on CNN noted, it's often the case that crime scene searches weeks or even months after the fact turn up new material.

In any case, it seems like it was probably a mistake to broadcast the search live, especially given the presence of so many unidentified photos.

At this point, however, it's too late to do very much. The residence has been boarded back up, but the interior has already been pretty thoroughly ransacked. The images have been broadcast, and the damage has been done.

Update: The FBI confirmed just moments ago that they are investigating the attack as an "act of terrorism."

Update 2: At the same press conference this afternoon, and FBI official responded to questions about the presence of media inside the apartment by saying, "Once we turned that location back over to the occupants of that residence, or once we board it up, anyone who goes in at that point, that's got nothing to do with us."