Women Can Assume All Combat Roles in U.S. Military, Despite Marine Corps Objections

Gender equality arrives on the battlefield. 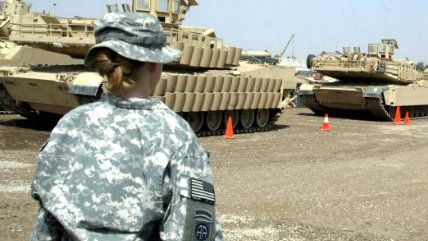 The Pentagon announced Thursday that it will, for the first time, allow women to assume all combat roles in the U.S. military. "There will be no exceptions," Defense Secretary Ashton B. Carter said at a news conference announcing the change, which negates a 1994 rule restricting women from artillery, armor, infantry, and other combat roles (at least officially; female soldiers often wound up in combat in Iraq and Afghanistan).

"As long as they qualify and meet the standards, women will now be able to contribute to our mission in ways they could not before," said Carter. This includes participating in front-line combat positions and serving as Army Rangers and Green Berets, Navy SEALS, Marine Corps infantry, and Air Force parajumpers, jobs that were previously only open to men.

As J.D. Tuccille noted last December, support from active-duty armed forces personnel for opening at least some combat-jobs to women increased from 34 percent in 2011 to 41 percent in 2014, while opposition dropped to just 28 percent.

The decision to open all combat positions to qualified women—which comes following a three-year review—was supported by the Army, Navy, Air Force, and Special Operations Command. Only the Marine Corps requested some exemptions, which Carter denied.

"Carter said he overruled the Marines to open all combat positions to women because the military should operate under a common set of standards," The New York Times reports.

The Marine Corps has long held concerns that integrating women into combat units could erode morale in all-male platoons and lead to increased sexual tension that would undermine fighting capability. But a Marine Corps study made public by a women's advocacy group this week found that after months of testing mixed-gender combat units, troops reported morale equal to that of all-male groups and higher than noncombat integrated groups.

In addition, the study found sexual assault levels no higher than in the Marines as a whole.

Nancy Duff Campbell, co-president of the National Women's Law Center, praised the announcement. "It's a thrilling day for women serving in the military — and for women across the country," she said. "We applaud today's announcement that knocks down the last remaining official barrier to women's military service and ensures the full integration of women into all military jobs, positions and units."

The Pentagon began lifting its ban on women in combat roles in 2013, under then-Defense Secretary Leon Panetta. The restriction was "seen as increasingly out of place during a decade of war in Iraq and Afghanistan in which women were increasingly in harm's way,"  Reuters notes.

The first three women to enlist in the Marines' physically-demanding infantry course graduated in 2013; they had volunteered as part of a study on opening ground combat jobs to women. The three graduates were part of an initial group of 15, the rest of whom left the program voluntarily or were injured during the course.