The ideals of freedom and autonomy must be put back at the heart of the pro-choice agenda. Let's start by defending the right of the pro-life side to say whatever it wants. 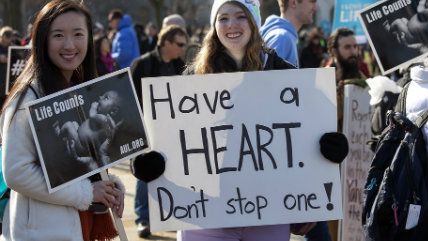 Who's to blame for the shooting at Planned Parenthood in Colorado? Those of us who believe in individual responsibility, that people have free will and the choice of whether to do good or bad, will say: "Robert L. Dear Jr. is to blame. No one else but Dear." He plotted this vile assault. And he carried it out. No one hypnotised him and planted this plot in his head. He's no Manchurian Candidate. He chose to kill, and he should be punished for it.

But some on the pro-choice side, which is my side, have a different take. They're pointing the finger of blame at those who use fiery pro-life rhetoric, or, as I prefer to call it, anti-choice rhetoric. They claim that a swirling anti-abortion outlook, promoted by Republicans and various religious hotheads, create the conditions under which the likes of Dear become murderous. And now they're demanding that pro-life people tone it down, police their politics, and watch their words.

This is a really bad idea. Even those of us who find pro-life arguments deeply unconvincing, and occasionally offensive, should take a stand against attempts to guilt-trip pro-lifers into timidity or silence in the wake of the Planned Parenthood shooting—something both pro-choice politicians and pundits were quick to do.

Colorado Gov. John Hickenlooper (D) called on both pro-life and pro-choice activists to "tone down the rhetoric." Violent crimes like Dear's could be a consequence of such "inflammatory rhetoric," he said. Ben Carson wrung his hands over the "hateful rhetoric" of too many in the abortion fray, arguing that moral heat can be "detrimental to our society."

Writing in The Guardian, feminist Jessica Valenti said Dear's crime was "the predictable result of a culture that demonizes abortion, uses fantastical and false rhetoric about Planned Parenthood, and allows politicians and activists to make false representations about women's reproductive health."

The word "allows" is especially ominous there. What's the suggestion: to disallow heated or plain wrong talk about reproductive health?

Valenti, like others, unwittingly erases Dear's culpability for his crime. Her description of Dear's actions as the "predictable" result of strong rhetoric suggests he lacks agency, that he's nothing more than a vessel through which other people's ideas flow and then explode. Ironically, she's doing Dear a favour, diluting his wickedness through finger-pointing at the "lies, language and culture of misogyny" that apparently facilitate "this kind of violence."

Over at The Washington Post, Ruth Marcus says that those politicians and lawmakers who over the past few months have whipped up myths and moral panic about Planned Parenthood's "sale of fetal parts" must take some blame for the "ensuing violence." She concedes that her argument that anti-Planned Parenthood politicians are partly culpable for Dear's killings could be seen as a "slippery, subjective slope," since "holding advocates responsible for such unintended consequences risks dampening speech." But she forges ahead nonetheless, insisting that "extreme rhetoric combined with falsehoods tips the balance towards greater culpability."

Just as conservatives call for clampdowns on death metal after school shootings, or moral panickers about gangsta rap try to hold edgy hip-hoppers responsible for gang violence, so supposedly liberal pro-choicers want to indict the passionately pro-life politician or priest for the violence of a mercifully small number of individuals. It's a pseudo-liberal version of media-effects theory, deploying the same hackneyed, unproven argument that has been used by censors for decades: that controversial or heated or misleading words and images could propel individuals towards crime.

It's a form of moral blackmail: Shush your passion, dial down your ideals, or people will die.

The post-Colorado instinct to "dampen speech" also points to a larger problem in pro-choice politics today: an inconsistency on freedom and autonomy, and a shift away from emphasizing women's capacity to determine their destinies towards presenting them (and everyone else) as fragile individuals in need of protection from nasty words and wicked trends.

The reason I am pro-choice is pretty simple: like John Stuart Mill, I believe that "over his own body and mind, the individual is sovereign"—or, in this case, over her body and mind the individual is sovereign. Individuals must be free to believe and say whatever they like, and to behave and govern themselves and their lives as they see fit, just so long as they do not harm anyone else or anyone else's property.

To my mind, abortion rights are absolutely essential to the ideal of moral autonomy. If women stop being sovereign over themselves the minute they become pregnant, then they aren't free. Their bodies become subject to stringent laws, and their individual sovereignty is usurped by a higher authority tyrannically presuming to speak on behalf of something inside the woman's body.

But too much pro-choice activism is becoming depressingly illiberal. Pro-choice campaigners on American and British campuses have banned pro-life speakers on the basis that their words will harm women's "mental safety." And there are calls to prevent pro-life protesters from gathering outside clinics lest they confuse or upset women who are "in a vulnerable state."  The irony is a dark one: many of those who claim to be defending women's moral autonomy simultaneously call into question that autonomy, by presenting women as weak individuals whose "mental safety" can be threatened by mere words or arguments.

Do we trust women or not? Not simply to decide the future of their pregnancies but also to engage in robust public discussion about all manner of issues, including abortion? I do. The ideals of freedom and autonomy must be put back at the heart of the pro-choice agenda. Let's start by defending to the hilt the right of the pro-life side to say whatever it wants, for three reasons: 1) because pro-lifers must enjoy the same freedom of speech as everyone else; 2) because the adult, free-thinking public is more than capable of making up its mind about the virtues or otherwise of pro-life speech and does not need state governors or feminists to think on its behalf; and 3) because it is massively in the interests of pro-choice people to allow pro-lifers to speak freely and angrily. It gives us something to challenge; to take down; to pit our own better, more liberal, more humanist arguments against.