Databases: Violating the Rights of Muslims and Gun Owners

Something else Donald Trump and Democrats have in common 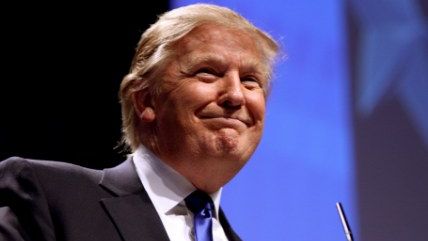 Part of what makes Donald Trump so appealing to the media but also repellant to its more elite members is that he will say seemingly anything. His ethos revolves around no ideology at all other than the idea of America "winning" over other countries. As such, he is going to recommend whatever he thinks will help with "winning" regardless of any sort of moral consideration.

So, all weekend long the political media cycle has been over what Trump wants to do about Muslims. Does he want them to be in databases? Give them special IDs? Internment camps? Whatever? Trump didn't rule anything out during an interview last week, which prompted the idea that he would be down for databases or anything else. But he didn't actually endorse a particular plan, and this caused some confusion. Then he was asked further about it and was still a bit vague.

Chas Danner at New York Magazine goes through all the conversations that happened since last Thursday and tries to put it all together to try to figure out what Trump is actually recommending. Danner is unsuccessful because Trump just says whatever sounds tough or pushes forward his concept of what "winning" looks like. The charitable interpretation is that he wants to keep track of any Syrian refugees. The uncharitable interpretation is whatever surveillance and diminishment of liberties you can possibly imagine, which he has also clearly said.

Ben Carson did specifically endorse increased surveillance of "a mosque or any church or any organization or any school or any press corps where there was a lot of radicalization and things that were anti-American," he said in South Carolina Saturday. He also, bafflingly, said that the FBI currently only has enough funding to monitor "30 to 60 people," according to the Associated Press.

Other candidates have pushed back on this surveillance concept. Jeb Bush, Ted Cruz, Marco Rubio, and Rand Paul all dismissed the idea. Rubio, though, has instead called for shutting down any location, be it a mosque or an Internet café, that the government believes is used to radicalize terrorists. On Sunday's Face the Nation, Paul went on attack against both Trump and Rubio (again reinforcing the idea that Rubio is the shadow frontrunner):

"Should we target mosques and have a database of Muslims? Absolutely not, and I think that's really disqualifying for both Donald Trump and Marco Rubio to say that we're going to close down every place that potentially has a discussion that might lead to extremism. That would require some sort of 'religious czar' that I think isn't consistent with our freedom."

Watch the whole interview with Paul here. (And remember that Paul's proposed solution is to make it much harder for immigrants from troubled countries to come to the U.S. in the first place.)

But Trump is not alone in believing that databases should be used to deny people's civil liberties. For an idea just as bad as Trump's, we'll need to cross the aisle to the Democrats. As Brian Doherty had previously noted, the New York Daily News, in its tabloid-style anti-gun push, has been calling for the federal government to ban the sale of guns to people who are suspected of being terrorists on the basis of being on federal terror watch lists.

Not actually even charged with any sort of crime. Just suspected by the Department of Justice.

Now two Democratic representatives, Zoe Lofgren (California) and Bennie Thompson (Mississippi) are pushing forward the No Guns for Terrorists Act of 2015. Chuck Schumer (D-N.Y.) announced he would push legislation in the Senate. Like most legislation, this bill's title is a lie. It all but convicts people and deprives them of not just their Second Amendment rights, but their Fifth Amendment rights as well.

Schumer on Sunday put out a little sign that stated "'No fly' should mean 'no buy'" while promoting this legislation. Have these Democrats forgotten the problems with the no-fly list and the lack of due process? The Department of Justice is being sued by the American Civil Liberties Union (ACLU) and is losing, badly, because there are people on the list who shouldn't be there and the Transportation Security Administration (TSA) has not put into place the appropriate due process for people to challenge their inclusion. Thanks to a whistleblower, we know that there are hundreds of thousands of people on federal watchlists who have no known ties to terrorist groups. That information seems to be lost from the reporting. Note that progressive media outlet AlterNet has a story about "gun nuts" trying to stop Congress from closing this "loophole" that mentions how many people are on watchlists, but makes no mention of the ACLU lawsuits. But a search on AlterNet shows that they know full well there are huge problems with who is getting put on these watchlists.

Let's be very clear here: There is no real policy difference between what Trump is proposing and what these Democrats are proposing. They want to treat people as suspects on the basis of inclusion on a database and then control their civil liberties. They want to deprive individuals of rights on the basis of a federal classification that has little transparency or due process. This Democratic push is an absolutely cynical and shameful attempt to gin up fear-based votes. Lofgren is actually a tech privacy advocate who is fighting against government-mandated encryption "back doors" and to keep the Department of Justice from abusing anti-hacking laws. She, of all people, should know better than to just simply let the federal government deprive people of their liberty on the basis of inclusion on a list somewhere.