The secretary of state says there was "perhaps even a legitimacy" to the Charlie Hebdo massacre-no, strike that. 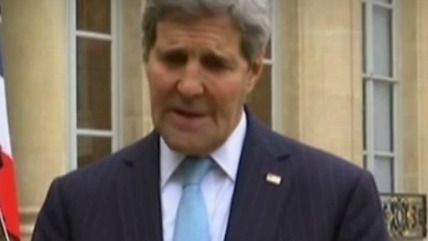 There's something different about what happened from Charlie Hebdo, and I think everybody would feel that. There was a sort of particularized focus and perhaps even a legitimacy in terms of—not a legitimacy, but a rationale that you could attach yourself to somehow and say, "OK, they're really angry because of this and that." This Friday was absolutely indiscriminate. It wasn't to aggrieve [sic] one particular sense of wrong. It was to terrorize people. It was to attack everything that we do stand for.

Kerry quickly backtracked from saying the Charlie Hebdo attack was legitimate and ended up saying it was understandable, which is bad enough. After all, Kerry seemed to be saying, the paper had published pictures that offended Muslims, so it makes sense that some of them decided to express their displeasure with bullets instead of sharply worded letters to the editor. Similarly, Pope Francis, who expressed incomprehension at Friday's attacks, was more empathetic after the Charlie Hebdo massacre, saying it's only human to respond with violence when someone insults your religion.

No, it is not understandable, and it is not only human, which implies that it's natural and expected. Beating someone for disrespecting your deity, let alone killing him, is immoral, illiberal, uncivilized, and barbaric. If any act of violence is an attack on "everything that we do stand for," surely a murderous assault aimed at punishing and deterring heresy qualifies. Pace Kerry, the point of Al Qaeda's attack on Charlie Hebdo's offices was precisely "to terrorize people," to make them think twice about expressing opinions that might rub religious fanatics with guns the wrong way. The freedom to say what you think without fear of death is surely more important than the "sense of nationhood and nation-state" that Kerry fetishizes.

Nor is Kerry right to say that there was no discernible grievance underlying last week's attacks. The gunmen themselves proclaimed that they were retaliating for France's attacks on ISIS in Syria. In other words, they were "really angry because of this and that." Yet in Kerry's view, that is not "a rationale that you could attach yourself to."

Needless to say, no matter what you may think about France's intervention in Syria's civil war, indiscriminate attacks on diners and concertgoers are not an appropriate reaction to decisions made by politicians and carried out by soldiers. Last week terrorists responded to violence with violence, recognizing no moral distinction between combatants and civilians. Last January terrorists responded to cartoons with violence, recognizing no moral distinction between speech and assault. When Kerry implies that the latter conflation is less troubling, he does no service to the Enlightenment values he is ostensibly defending.