College Students Want to Make Everything Free Except Their Minds 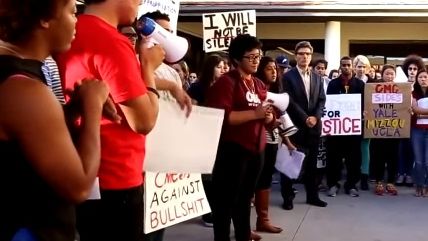 At least it's not just about offensive Halloween costumes, anymore: Students across the country engaged in protests Thursday and Friday as part of the Million Student March for debt forgiveness, free college, and a $15 minimum wage.

I have serious reservations about these goals—a higher minimum wage would cripple the opportunities of young people, debt forgiveness would punish taxpayers for the crimes of the privileged, and free college just isn't very useful for poor people. What's more, students can't articulate a way to pay for them, as evidenced by this painful exchange between an organizer and a not-unreasonable Neil Cavuto. (Read Scott Shackford for more on this specific topic.)

A necessary precondition for this exchange of ideas is a culture of robust free speech, particularly on college campuses. Unfortunately, a paramount goal of a non-trivial number of these recent student protests seems to be outlawing offensive ideas. In addition to the sad spectacle at Yale and the moment of censorship at Mizzou, there was this depressing turn of events at Amherst, according to Eugene Volokh:

From a statement by the group Amherst Uprising:

"5. President Martin must issue a statement to the Amherst College community at large that states we do not tolerate the actions of student(s) who posted the "All Lives Matter" and "Free Speech" posters. Also let the student body know that it was racially insensitive to the students of color on our college campus and beyond who are victim to racial harassment and death threats; alert them that Student Affairs may require them to go through the Disciplinary Process if a formal complaint is filed, and that they will be required to attend extensive training for racial and cultural competency.

6. President Martin must issue a statement of support for the revision of the Honor Code to reflect a zero-tolerance policy for racial insensitivity and hate speech."

According to the president of the Amherst College Republicans, the "All Lives Matter" posters were pro-life posters (or antiabortion posters, if you prefer). Here is what appears to be a statement from the students who put up the "All Lives Matter" posters. If the critics of the posters would like to pass along their views, beyond those I quote and link to from Amherst Uprising, I'd of course be delighted to excerpt and link to them.

Additionally, students at Claremont McKenna College in California succeeded in ousting an administrator for failing to do her job, as they put it: "It's literally your jobs to take care of us when we don't feel safe on this campus." The Daily Beast's Emily Shire reported:

However, [Claremont McKenna College student body President William Su] heartily endorsed Spellman's resignation. "It's not about intentions. It's about perceptions. Students don't even feel her office is a safe space," Su told The Daily Beast. "I'm pretty happy she resigned. I think it's the best move for our institution."

What's happening here is that students are conflating very different kinds of safety. Of course they should feel safe from actual violence. Universities are in fact obligated to protect them from threats to their physical security and in that specific sense, enforce "safe" spaces. But no university can—or should—guarantee students protection from emotional or intellectual dangers.

These kinds of safe spaces wouldn't actually be very safe for activist students. That's because what constitutes "hate speech" or offensive conduct is highly subjective; one student's antiwar protest evinces disrespect for the military in the eyes of a veteran, another student's BlackLivesMatter rally is interpreted as anti-cop by someone whose father is a police officer, demonstrations against Israel are considered anti-Semitic by Jewish students, and on and on.

Students who want to change the world—for better or worse—shouldn't be so hasty to codify a new regime of feelings-protection. People who think they lack real power are precisely the sort of people who ought to cherish free speech most strongly.

I participated in a HuffPost Live discussion on this topic on Friday (the Foundation for Individual Rights in Education's Samantha Harris was also a guest). Watch it here.

Hat tip: Headline inspired by a tweet from @icouldbeahacker