The Halloween Hoaxes Keep Rolling In

Yet more tales of tampered candy are exposed as frauds. 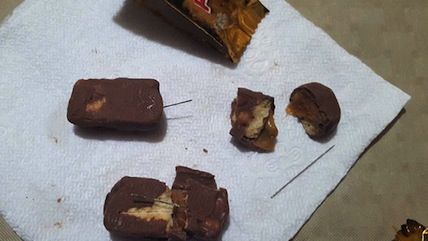 With all the monsters being Scooby-Dooed into oblivion this month, from those phantom Klansmen in Missouri to that imaginary army of assassins stalking cops, you may have already forgotten the spate of news reports about booby-trapped candy supposedly handed out on Halloween. But having posted a roundup last Wednesday of the tampered-treat hoaxes that had already unraveled at that point, I figure it's worthwhile to share some of the stories that have exploded in the week since then:

• A Fort Worth man has confessed to planting a razor in a rice krispie treat, then telling cops one of his kids received it trick-or-treating.

• A teenager in Salisbury, Maryland, has admitted inventing a story about finding a needle in a Twizzler. The boy says he was only trying to prank his family, and that he did not expect his parents to call the police.

• One of the most widely circulated candy-scare stories this year involved some needles allegedly hidden in candy in Kennett Square, Pennsylvania. They were hoaxes, too.

• A Hawaii woman got some attention by sharing a picture of needles she claimed to have found in her kids' loot. This turned out to be a recycled hoax: She had "borrowed" a much-circulated photo of the candy from Kennett Square.

Meanwhile, how many people this year have been nabbed for actually handing out tampered food to trick-or-treaters? Still a big zero.

For yet more candy cons, read my original post here. And for a different sort of holiday hoax, take a look back at the much-touted but entirely fictional "Halloween Revolt" here.