Memo to Rubio: We Already Spend Far More on 'Defense' Than Any Other Country

If Congress cut the Pentagon's budget in half, the U.S. would still be "the strongest military power in the world." 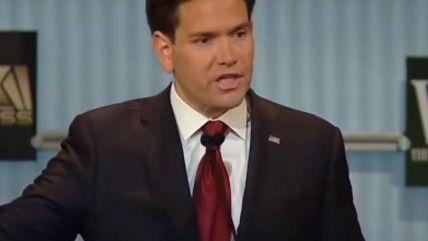 During last night's Republican presidential debate, Rand Paul criticized Marco Rubio's "plan for $1 trillion in new military spending" as "not very conservative." Rubio responded by inaccurately describing Paul as "a committed isolationist" and declaring (twice) that the United States needs to be "the strongest military power in the world." But Rubio did not explain why a bigger Pentagon budget is necessary to accomplish that goal. After all, the U.S. already devotes much more money to military spending than any other country.

In 2014 the United States, a country at peace with its neighbors that has less than 5 percent of the world's population, accounted for more than a third of the world's military spending. Congress could cut the Pentagon's budget in half, and the U.S. would still be "the strongest military power in the world."