How to Deal with Transgender Students in the Locker Room

A smart solution requires a willingness to compromise. 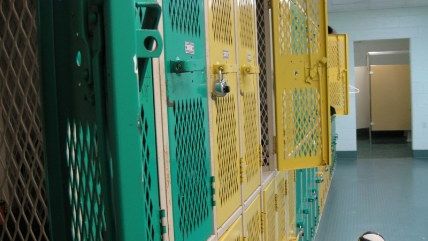 High school locker rooms are not places kids go to feel comfortable and relaxed. Baring your entire body to classmates and adults—friends, enemies, strangers, coaches—is a disagreeable obligation for most students. But for decades, the desire of adolescents for privacy has been deemed irrelevant.

That's no longer the case in Palatine, Illinois, where the public school district had to decide how to handle a transgender student who was born male but lives as a female.

The youngster's choice is clearly not a passing fancy or a ruse to shower with the girls, as Mike Huckabee might suspect. Her passport identifies her as a girl, which is what she looks like. She had her name legally changed. She's getting hormone treatments.

The school district has largely accepted her identification, letting her play on a girls' sports team and use the girls' restrooms. But it draws the line at the locker room, where it says other students must be protected.

Its solution is to provide a private space this student must use to change clothes. Several curtained areas were recently set up for the benefit of anyone who wants more privacy. The transgender girl, however, would have no choice.

This remedy doesn't satisfy the Office for Civil Rights of the Department of Education, which this week decided that restricting locker room access to "Student A" is a violation of Title IX, which forbids discrimination on the basis of sex in education programs. The policy means "providing services to her in a different manner, subjecting her to different rules of behavior, and subjecting her to different treatment on the basis of sex," it said.

Critics may say: Of course it does, because she is different. But mere difference is not enough to justify different treatment. Women differ from men, blacks differ from whites, and Catholics differ from Jews. Yet all are entitled to equal treatment.

The least enlightened approach would be to say that anyone born male should be treated as male, no matter what. But that solution has its own problems. Would girls be any more comfortable changing clothes alongside a girl who identifies as a boy, and is undergoing physical transition, than a boy who identifies as a girl?

Another option is to treat transgender kids as a third sex, assigning them to separate facilities. But that would officially stigmatize them as freaks. It would also exclude them from some normal activities, like boys' or girls' sports teams or other clubs.

The latter approach may look perfectly reasonable, and the district deserves credit for going as far as it has. But other districts in the area have found there is nothing to fear from the option recommended by the feds. The suburban Daily Herald did a survey and found that two large high schools, Barrington and Stevenson, report no complaints about letting transgender kids have normal access to the locker rooms and restrooms they choose.

The Palatine district says its goal is "to protect the privacy rights of all students when changing clothes or showering." But the same reasoning would justify separating gay kids from straight ones, lest the straight ones draw unwanted gazes. In practice, adolescents (like adults) have easily adjusted to what once would have been seen as an awful intrusion.

The district's concern about privacy is oddly narrow. Until recently, kids who prefer not to expose their bodies to anyone were obliged to change in restroom stalls. The superintendent acknowledges that most students don't shower at all, presumably for reasons of modesty.

When they have to disrobe, some students have friends shield them behind a towel or hold towels in their mouths to cover their fronts. Until Student A came along, privacy was not a district priority.

The feds' solution is a sensible compromise. It suggests that the district provide curtained changing areas, available to all, without forcing anyone to use them. As it happens, Student A says she would be happy to use them as long as she has a free choice.

If the district is serious about privacy, it can offer more spaces that cater to the needs of modesty. It might also post signs stating a locker room rule that most kids already know: Keep your eyes to yourself.