Another Halloween, Another Crop of Tampered-Treat Hoaxes

Halloween is over. Time for the annual Unraveling of the Tampered-Candy Pranks. 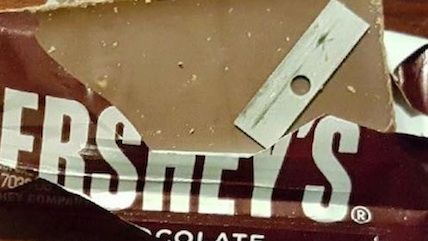 It's the first week in November, and that means it's time for one of America's great unsung traditions: the annual unraveling of the Halloween hoaxes. Every year, a new crop of news and social-media reports appear claiming that pins, razor blades, and sometimes more outré objects were found hidden in children's Halloween candy. And every year, a second wave of stories amends the first.

Hebron, Ohio, got a jump on the rest of the country, thanks to the local tradition of trick-or-treating on "Beggars Night" one or two days before Halloween proper. After a Hebron man claimed to have received some pot-laced candy Thursday evening, police tested the treats, found no traces of drugs, and declared the story a hoax before Halloween had even begun.

On Saturday night, the rest of the country was able to join in. In Auburn, Massachusetts, for example, police warned their Facebook followers that a child had found this "suspicious item" in her candy:

By the end of the evening, the story had fallen apart:

Meanwhile, a boy in Brainerd, Minnesota, claimed to have encountered this in his Halloween loot:

In the interval between Saturday night and Monday morning, that needle worried the authorities enough that there was talk of bringing the Food and Drug Administration into the investigation. But by the end of Monday, the cops had concluded that the kid made it up.

There was a report of an actual injury in Marion Center, Pennsylvania: A 16-year-old claimed she needed 23 stitches after biting some bubble gum with a razor hidden in it. That was a lie, too—she soon admitted the wound was self-inflicted.

My favorite candy hoax of 2015 so far comes from Blackwood, New Jersey, where a man named Robert Ledrew told first his Facebook friends and then the police that he'd found four sewing needles in his children's goodies. This time the hoaxer turned out to be the parent: Ledrew eventually confessed to the cops that he had inserted the objects himself, claiming he'd been trying to teach his kids a safety lesson. He certainly taught them some sort of lesson: He's being charged with filing a false police report.

Were there any genuine cases this year of tricks disguised as treats? We don't know. If you Google "tampered candy," you'll find several stories that have not been exposed as frauds, or at least haven't been exposed as of the moment I'm writing. A pill in a Snickers bar in Poughkeepsie, New York. A needle in a Milky Way in Chicopee, Massachusetts. A thumb tack in a Kit Kat bar up in Toronto. The Lorain, Ohio, Chronicle-Telegram reports that a local teen allegedly found a "metal object" in "the first piece of candy from her bag that she opened" (imagine that!), then "contacted police because she was worried someone else might have had their candy tampered with." (There were no similar reports in the town.) The most intriguing story, since it features two separate kids who reportedly did not know each other, involves a pair of toilet tank cleaning disks that got mixed in with a couple of children's trick-or-treat loot in Hopkinton, Massachusetts.

If the patterns of the past continue, some of those will eventually be proven fakes and some will remain unsolved. But you know what almost never happens? Hardly anyone ever actually gets nabbed for giving tampered candy to trick-or-treaters.

Snopes' page on Halloween sadism cites just one case of that happening, from 2000, when a Minneapolis man named James Joseph Smith was arrested for handing out needle candy. (The results: one minor injury and one felony charge.) I asked Joel Best, a sociologist at the University of Delaware who has been studying tampered-candy rumors for three decades, if he was aware of any other times someone decided to copy the legend and deliberately hand out harmful treats. "There was a case in New York in the '60s of a woman who was irritated that teens were still trick-or-treating," he replied. "She gave them ant pellets." And that's it.

As for those ambigious cases, Best finds it telling that hardly anyone ever gets hurt by the hidden blades. (Few pranksters are willing to go as far as that teenager in Marion Center.) Best has found one case over the years of a woman who needed some stitches, and there have been a handful of lesser injuries. At this point he doesn't bother to keep track of minor injuries anymore, since "they are almost never mentioned." More often the candy booby-traps are discovered—or "discovered"—before anyone takes a bite.

And the bigger sorts of damage? "I have never found a death or serious injury caused by a contaminated treat picked up in the course of trick-or-treating," Best says. Even if that isn't the impression you may have gathered from your Facebook feed.