Drone Registration: A Stupid Solution in Search of a Problem It Might Actually Fix

The occasional misuse of unmanned aircraft is an exaggerated issue that won't be corrected by bureaucrats. 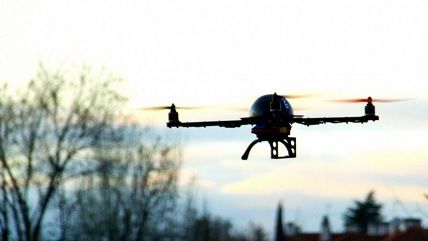 The list of business people, bureaucrats, and hobbyists who will help establish federal restrictions on drone use was dropped on the public last Thursday. This came after weeks of official telegraphing by the Federal Aviation Administration (FAA) and the Department of Transportation that Something Must Be Done about the dread scourge of unmanned aircraft doing stuff that absolutely compels lawmakers to seek the nearest television camera to deliver a good finger-wagging. That stuff includes buzzing aircraft, spying on cops who thought they had a monopoly on that job, and flying close enough to the White House to get the Secret Service's panties in a bunch (the president gets to threaten people with drones; returning the favor is just not done).

Since this is the government, it's no surprise that Transportation Secretary Anthony Foxx's insistence that "Registration will help make sure that operators know the rules and remain accountable to the public for flying their unmanned aircraft responsibly" is pointless nonsense bound to be heeded by the obedient and already responsible and defied by everybody else. It's also little surprise that the "problems" registration and restrictions are supposed to address are exaggerated to make the case for an expanded government role.

"There can be no accountability if the person breaking the rules can't be identified," Foxx scolded us all in an October 19 news conference. He presented registration of remotely operated aircraft as an educational opportunity—something that might be better done with brochures and a website, you might think, though that wouldn't offer the same opportunities for slapping around accidental transgressors whose drones actually crash.

After all, registration only works if you recover enough bits of the offending drone to identify its registration number. That's a point made by pilot and attorney Jonathan Rupprecht, who asks "If there is a crash, do you really think you are going to find the small piece of plastic that had the 'sharpie-drawn' N-number on it, the mailbox number stickers, or the serial barcode sticker under the gimbal?"

Rupprecht also asks just what is supposed to be registered in a field that has been driven by do-it-yourself innovation. "What is going to be considered the 'aircraft' for purposes of drones? The batteries, the motors, the transmitter, the flight controller? Is it only a whole aircraft? Are drone kits regulated or just fully assembled drones?" He correctly likens it to the problem of gun registration, though the difficulty with drones is even greater given the prevalence of off-the-shelf components. DIYers might be required to register, but only those who don't intend to cause trouble are likely to inscribe registration numbers on their own creations no matter what the rules say.

If officials do recover a registration number amidst the scraps of a downed widget, all they may find is a boozed-up government employee whose flying toy was caught by a gust of wind. That's apparently what happened when a quadcopter got tangled in trees at the White House and made national headlines. Substitute "kite" for "drone" and it's a big nothing of a story.

Which raises an interesting question: Just how big a threat is posed by drones anyway? Yes, pilots do report being buzzed by remotely piloted devices, and FAA officials promptly publicize each incident. But when the Academy of Model Aeronautics (which is represented on the new drone registration task force) examined the FAA data in September, it found that only 3.5 percent of the agency's 764 recorded incidents were real near misses between drones and piloted aircraft, with many more "incidents" consisting of nothing more than sightings. In the serious cases, hobbyists weren't the big problem. "Some  of  the  most  serious  incidents  in  the  FAA  data–including  all  actual  crashes–involve government-authorized military drones, not civilian drones," the group reported.

Sighting of balloons and birds mistaken for drones padded out the FAA's list of dangerous happenings demanding an expanded role and, presumably, budget for its employees.

That doesn't mean that there is no pushing the envelope with drones, or outright misuse. It does mean that it's a much smaller problem than we've been led to believe.

But sometimes people do misbehave. That's been a fact of life in every area of human endeavor throughout history. Tagging and tracking the entire population in hopes of catching a few people who buzz airliners and then crash their toys is not only pointless (because deliberate bad actors won't comply with the registration process) and intrusive, it's also dangerous. That's because misbehavior has a way of becoming "misbehavior" as officials expand the definition to encompass innocent or even praiseworthy activity that pisses them off.

That includes activity such as monitoring the police with remotely piloted aircraft. The folks adding camera-equipped drones to police department arsenals may be eager to watch us, but they resent having the attention returned. Given the tendency for government to slap at its watchdogs and critics, civil liberties activists would rank prominently among those well-advised to ignore requirements to register their drones.

For safety's sake, there are alternatives to registration, including geofencing. That's a technology that sets up location-based perimeters around sensitive areas that drones are programmed to respect. It has the potential to deter problems with unmanned aircraft without recording operators' identities. Senator Charles Schumer (D-NY), who thinks all areas of life can be divided into things that should be forbidden and those that ought to be mandatory, wants to make this particular approach a commandment. But geofencing could also be implemented on a voluntary basis by drone manufacturers and users (popular maker DJI is already onboard).

Like registration, geofencing is easily evaded by anybody unwilling to be limited. But so is every legislative protection against government officials' fears of robotic airborne assassins. As always, new rules will affect people willing to be bound by them, and those incidentally scooped up; deliberate scofflaws are generally beyond their reach.

That includes the government itself. In the course of detailing the flaws in the FAA's scheme to register privately owned drones, attorney Rupprecht points out that the federal agency appears to be in violation of legal requirements for the rulemaking process, as well as limits on its authority.

It's tempting to call for registration of federal officials to address the problem. But, as always, yet another database is unlikely to correct deliberate bad behavior.