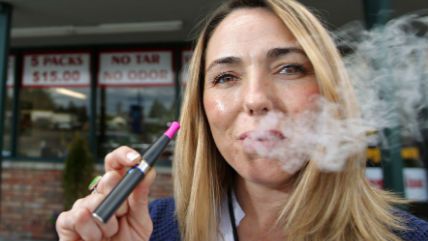 People who welcome e-cigarettes as an alternative to the conventional kind hope they will help smokers quit, thereby dramatically reducing the health risks they face. People who fear e-cigarettes worry that vaping will encourage smoking among people who otherwise never would have tried tobacco by getting them hooked on nicotine. New survey data from the U.S. Centers for Disease Control and Prevention (CDC) provide evidence that top officials at that agency are wrong to favor the latter view.

In other words, never-smokers rarely become regular vapers, which suggests the CDC's fears are misplaced, especially since there is no evidence that never-smokers who vape are therefore more likely to become smokers or that the rising popularity of e-cigarettes has given a boost to conventional cigarettes. To the contrary, vaping and smoking rates are moving in opposite directions. The CDC's survey data suggest that's more than a coincidence: Not only was vaping much more common among current and former smokers than among never-smokers, but current smokers who had tried to quit in the previous year were more likely to be vapers than those who had not.