Feminist icon holds human rights in the highest regard-as long as they're for the right kind of people. 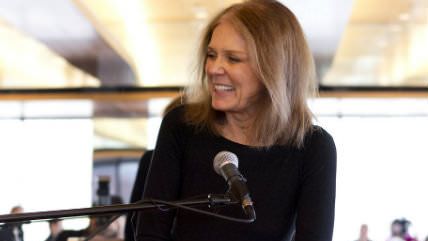 In a recent interview with Time magazine, feminist icon Gloria Steinem—currently promoting a new travel memoir—says that the biggest threat to reproductive rights today is "patriarchy… the very definition (of which) is that men control women's bodies in order to control reproduction." In contrast, Steinem says she believes that "it's a simple human right for each of us to control our own physical selves." Luckily, she thinks that "we're moving toward a principle you might call bodily integrity, that is, the power of the government stops at our skins—for men and women."

It's a nice sentiment—but alas, Steinem's concept of human rights and bodily integrity only applies to certain people. Steinem has been an outspoken proponent against sex workers' right to bodily integrity.

Over the summer, Steinem was one of a group of Hollywood celebrities and high-profile feminists condemning the human-rights group Amnesty International for its support of completely decriminalizalizing prostitution. In 2014, Steinem said it was wrong to use the term "sex work," a preferred term of many women who willingly work in the sex trade, because prostitution is merely "commercial rape"—a "body invasion" that is "not like any other work." Never mind that a lot of grown women choose to be sex workers and do not experience prostitution as commercialized rape; that's how Steinem sees it, and so pity the poor sex worker who thinks she gets to define her own experience.

Steinem goes on, when asked about police brutality, to suggest that we don't pay enough attention to police brutality against women and should address this topic more often. Yes, let's—starting, perhaps, with all the crimes cops commit against female sex workers? Crimes they're very likely to get away with because under a system of criminalization police wield so much coercive power over these women.