The Fuzzy Politics of Religion: When Is It OK to Judge Candidates for Their Faith?

As Ben Carson rises in the polls, the quadrennial question is being posed again. 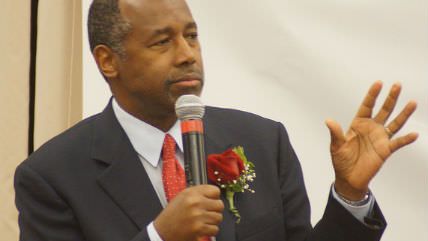 Changes are afoot in the Republican presidential primary campaign. With new poll numbers suggesting he may be losing his grip on the frontrunner slot, the bombastic business mogul Donald Trump resorted over the weekend to publicly ruminating on the religion of his top rival, Ben Carson.

"I'm Presbyterian," Trump said during a rally on Saturday. "Boy, that's down the middle of the road, folks, in all fairness. I mean, Seventh-day Adventist, I don't know about. I just don't know about."

Thus, the eternal election-year question has again been raised: Is it kosher, so to speak, to judge a person seeking public office for his faith?

In a country that prides itself on religious tolerance—one where a right to free exercise is codified in the first words of the First Amendment—the idea of holding someone's religion against him strikes many as untoward. Consider the reaction when Carson himself said in September that he wouldn't vote for a Muslim for president. The comment sparked outrage and claims of bigotry, and he was forced to walk it back.

In a 1960 speech to a room full of Protestant ministers, John F. Kennedy, then a candidate for president, famously made the case for why religion should have no bearing on the decisions and positions an officeholder makes and takes. "I believe in an America where the separation of church and state is absolute," he said. "I believe in a president whose religious views are his own private affair….Whatever issue may come before me as president—on birth control, divorce, censorship, gambling or any other subject—I will make my decision in accordance with these views, in accordance with what my conscience tells me to be the national interest, and without regard to outside religious pressures or dictates," he promised.

It's a rather sterile view—the notion that a person's religious beliefs should or even could be separated from his conception of what's in the "national interest." What is a conscience, if one's faith has no effect on it? What are religious beliefs, if not things that inform one's sense of right and wrong?

It's also, I think, at odds with reality. Whatever Kennedy and his contemporaries may have wished, Americans do take into account the religious persuasions of those who are asking for their vote. Gallup has asked for years whether people would cast a ballot for otherwise well-qualified candidates who also happen to be a member of various demographic groups. Just this June, the company found a quarter of respondents saying they would not support an evangelical Christian for president, and some 40 percent saying they would not support an atheist.

What's more, it seems right and just that voters would look to the moral bases on which an officeholder will make life-or-death decisions. Democracy places an awesome burden on the population to decide who should be entrusted with the awful power to approve laws and then enforce them, at gunpoint if necessary. A candidate's values are and should be an important factor in determining whether to support him, because they speak directly to the type of leader he would be.

We humans haven't historically demonstrated a keen ability to give a fair hearing to people whose beliefs and traditions differ from our own. Though Kennedy may have genuinely believed the things he said in his Protestant ministers speech, the reason he felt compelled to lay them out so starkly was that, at the time, the possibility that a Roman Catholic might be elected to the presidency was, in the eyes of many Americans, a scandal.

Anti-Catholic sentiment can seem like a thing of the past. After all, today the vice president is Catholic, as are six of nine Supreme Court justices. We have a Catholic speaker of the House (John Boehner) who succeeded one Catholic (Nancy Pelosi) and will very likely soon be succeeded by another (Paul Ryan). And that same Gallup survey from June found more than 90 percent of Americans now saying they would vote for a well-qualified candidate who was Catholic. The Sistine ceiling has been shattered. But as a Catholic myself, I'm intensely aware that it wasn't always so.

In 1928 the Democratic Party made Al Smith the first Catholic presidential nominee only to see him bloodied by religiously motivated attacks. According to The New York Times:

The school board of Daytona Beach, Fla., sent a note home with every student. It read simply: "We must prevent the election of Alfred E. Smith to the Presidency. If he is elected President, you will not be allowed to have or read a Bible." Fliers informed voters that if Smith took the White House, all Protestant marriages would be annulled, their offspring rendered illegitimate on the spot.

He lost the election in a landslide, thanks in part to fears fomented by an active Ku Klux Klan.

Seventh-day Adventists hold some strange-seeming beliefs—among other things, they think God created all the earth's living beings over the course of six 24-hour days, and that all true disciples of Christ observe the sabbath on Saturdays, not Sundays. David Corn at Mother Jones drew on Adventist teachings about the "end times" to ask in a piece earlier this week if Carson believes, as Corn reads other members of that church as doing, that "almost all evangelical Christians will soon join with Satan to oppose Jesus Christ."

The neurosurgeon has thus far always stood by the views of his church. In a 2013 interview with the Adventist News Network, he said, "I'm proud of the fact that I believe what God has said, and I've said many times that I'll defend it before anyone. If they want to criticize the fact that I believe in a literal, six-day creation, let's have at it because I will poke all kinds of holes in what they believe."

As weird as that may seem to me, I recognize that the line between a curious religious view and a disturbing one is both blurry and overdetermined by familiarity. Growing up in Southern Baptist country, I was often (wrongly) accused of worshipping the virgin Mary and (rightly) accused of holding that bread and wine during Holy Communion are transformed into Jesus' body and blood. I can see how that might be alarming, especially to those who haven't spent much time with other Roman Catholics. Still, I'd prefer people not reflexively denounce me for my kooky-sounding belief system before getting to know the mostly reasonable person I like to think I am.

In keeping with a general "do unto others" philosophy, then, I'd say we shouldn't be in the habit of dismissing candidates as unqualified for public office simply because they affiliate with a religion we see as misguided. That response undercuts the value of pluralism that Americans love to pay lip service to but aren't always great at living out.

There are many reasons I think Ben Carson has no business being in this race, topmost being his apparent lack of mastery over basically any of the policy issues facing the country today. But the neurosurgeon's statements about his faith are, for me, among the least crazy things he's said. In that same 2013 interview, for example, he was asked how he handles being in the spotlight. "Prayerfully, humbly, recognizing that you always have to make sure you keep yourself in the background," he answered. "It's very easy when all the spotlights are on you to think, 'Oh, wow, I'm a great person.' You have to make sure to resist the urge to think that, and always remember that whatever you do, God is first."

It's both unrealistic and probably a mistake to say public figures' religious beliefs should be off-limits. A candidate's values are one of the most important things a voter can know about him. But if that's true then it's also important to understand what those values actually are, as opposed to just looking at the caricature of his faith group that's ascendant among the people you happen to know.

Of course Trump has the right to say whatever he wants about his opponents' faith. But free speech goes both ways. As a politician, if you traffic in stereotypes and ugly implications, be ready to be called out for it—and for the possibility that voters might be less than pleased by what it says about you, and your values, and the type of leader you would be.