How Silicon Valley Is Abetting Anti-Beef Hindu Barbarians in India

Mark Zuckerberg can atone for embracing Narendra Modi by sponsoring for asylum the family of the man lynched for eating beef. 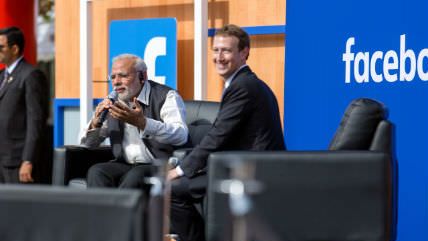 ago, protesting Indian-American activists sent the young billionaire hundreds of bottles of Purell. The unsolicited hand sanitizer was meant to remind Zuckerberg that he, along with the entourage of Silicon Valley CEOs whom he led in wooing and wowing Modi, was glad-handing a Hindu nationalist still tainted with the blood of hundreds of Muslims murdered in a 2002 pogrom in Gujarat when Modi was chief minister of the state.

Within a day of Modi's return to India after his triumphant Silicon Valley visit, the brutal murder of a Muslim turned the Purell stunt into a prescient warning about the dangers of Zuckerberg-style selective diplomacy. By naively lapping up Modi's happy talk about "inclusive development" while ignoring the rest of his odious agenda, Zuckerberg and Co. undermined the struggle of India's persecuted religious minorities.

Here's what happened: On Sept. 28, in a village less than 60 miles from Modi's posh New Delhi home, a Hindu priest announced in a local temple (under threat by some hot heads, he claims) that a Muslim family was consuming beef, a no-no for Hindus who regard cows as sacred. Shortly afterward, an enraged Hindu mob — mobilized via WhatsApp, ironically enough — barged into the family's house. It pulled out the ailing 50-year-old father and his 22-year-old son from bed. Disregarding the pleas of the three bewildered women in the house, they beat the men with such rapturous fury that within minutes the father was dead and his son in a coma.

The murder was shocking not just for its raw savagery. Or its vicious attack on personal freedoms. Or the primitive triviality of the allegation that might yet turn out to be false. (Authorities have shamefully sent the meat in the family's refrigerator for forensic testing to determine if it was really beef, as if that should make any difference. It wasn't, as it turns out.)*

This village had been a model of inter-religious harmony for the six decades since India's independence from the British, with nary a hint of violence. Though Muslims were always a small minority among the 6,000 people, they were intricately woven into the village fabric. Each community greeted the other with its salutation and jointly celebrated each other's religious festivals. The bludgeoned man's older son was a technician in the Indian Air Force.

Given such fears, the first thing that any decent leader—let alone one who chants the mantra of "good governance"—would do is reassure the country that he'll redouble his efforts to protect all Indians, especially vulnerable minorities. He would pledge to severely punish the assailants regardless of party—which would be reassuring given that some of the suspects arrested are related to the local leader of Modi's BJP (Bharatiya Janata Party). He might also, as per Gandhian tradition, lead a path yatra—a solidarity march—to the family's house, as many have been urging.

Narendra Modi has done none of that.

Instead, this great communicator—whom Zuckerberg hailed as a model leader who would revolutionize governance with his masterful use of social media "to connect with citizens"—has issued not a single tweet, and posted not a Facebook statement expressing regret or offering condolence for this dead Muslim citizen. Despite escalating calls from opposition leaders and the intelligentsia demanding that he condemn the episode, he remained stubbornly mute—prompting several award-winning writers to return their national honors in protest. Finally, he issued a bland statement calling for "communal harmony" that everyone knows he doesn't mean.

Worse, Modi's Culture Minister Mahesh Sharma, a moral idiot who recently opined that India's late President Abdul Kalam was patriotic "despite being a Muslim," dubbed the vicious beating an "accident." He consoled the family by noting that at least the 17-year-old daughter of the slain man was untouched!

Most obscene, however, has been the response of Modi's local BJP comrades who, emboldened by his silence, are accusing the state government, which is in the hands of an opposition party, of "minority appeasement" for investigating the murder. They are demanding a counter-investigation to determine if the family participated in cow slaughter—which is banned under state law although consuming beef is not.

All of this is shocking, but not surprising given that Modi himself opened the beef fault line in the country. During his campaign, he accused Congress, then the ruling party, of fomenting a "pink revolution"—subsidizing mass cow slaughter to boost beef exports—to shame Hindus into voting for him. Since he assumed office, many states have pushed new beef bans or started aggressively enforcing defunct existing ones, basically setting up Muslims and other beef-eating minorities for persecution. Millions of Muslim butchers and tanneries have been thrown out of business by the anti-beef jihad.

This is only one of the many attacks on personal freedoms by Hindu nationalists under Modi. If Zuckerberg and his fellow CEOs don't fully understand Modi's agenda, it is because they live in a bubble where they get their cues on India-related matters from the Indian-American IT professionals who dominate Silicon Valley. The vast majority of these folks, despite their outward trappings of Americanization and modernization, are assertive Hindus and true believers in Modi's hype about making India a technological superpower. They come from a class and caste background that inclines them to cover India's warts, even if that means pooh-poohing the plight of poor and persecuted minorities.

This horrible beating ought to have opened Zuckerberg's eyes. There are a number of things he can do to undo the damage done by his glorification of Modi.

Zuckerberg could symbolically join the human rights groups in India that are organizing beef-eating festivals around the country by publicly eating a steak in the honor of Mohammad Akhlaq, the murdered father.

And how about this: To commemorate Modi's Digital India campaign to offer universal internet access in the world's largest democracy, Zuckerberg had created a special app draping his Facebook profile picture in the tricolored Indian flag and allowing other users to do the same. He should now create a similar app with Akhlaq's face in the background.

But, above all, he should sponsor Akhlaq's family for asylum in the United States and pay for every member's travel and settling costs. Offering protection to those fleeing religious persecution is the very essence of America's asylum policies and there is no better candidate for them than this family. This will not only allow it to heal but also powerfully signal that the world is losing confidence in India's ability to protect its minorities under Modi.

One reason Zuckerberg and the Silicon Valley crowd are making nice with Modi is that they want unrestricted access to India's internet market, slated to be twice the size of America's by the end of this decade. But after Akhlaq's lynching, if powerful men like them won't stand up to Modi for fear of retaliation, where does that leave India's powerless minorities? If their plight continues to deteriorate on Modi's watch, no amount of Purell will cleanse Zuckerberg's conscience.