Amnesty International offices around the world to be targeted this month in protest of AI's support for decriminalizing sex work. 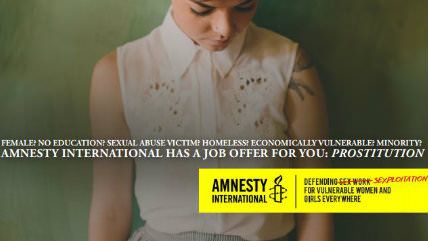 The anti-porn activists at Morality in Media, recently rechristened the "National Center on Sexual Exploitation" (NCOSE), are launching a coordinated attack on human-rights organization Amnesty International (AI) for its support of decriminalizing prostitution.

At a biennial meeting in Dublin in August, AI voted to officially support decriminalization of the sex trade, including sex workers, sex buyers, and brothel owners. NCOSE is now organizing protests outside Amnesty headquarters worldwide, slated for October 23. It's also urging supporters to email, tweet at, and otherwise contact AI with the message: No Amnesty for Pimps.

"Amnesty International claims to 'campaign for a world where human rights are enjoyed by all,'" stated an NCOSE email today. But "decriminalization of brothel-keeping and soliciting is a gift to pimps, sex traffickers, and sex buyers that confers a right to buy and sell other human beings."

Equating the temporary, paid provision of sexual services to the "buying and selling of human beings," however, only makes sense if you also think paying your hairdresser, landscaper, and barista are forms of slavery. And for the record, neither Amnesty nor anyone that I am aware of supports the decriminalization of sex trafficking, i.e. forcing others into prostitution. Fortunately, sex workers, their clients, and their associates could much more easily report sex-trafficking scoundrels to the police under a system of decriminalized prostitution—something they can't do now for fear of being arrested themselves.

NCOSE goes on to state that Amnesty's new policy does "not protect the human rights of persons in prostitution, but guarantee that their dehumanization and exploitation will continue." In NCOSE's ideal world, protecting the "human rights or persons in prostitution" would involve throwing them, their employers, and their customers in prison along with the folks who force people into sex.

When not trying to diminish the human rights of sex workers, NCOSE also enjoys chastising the Department of Justice for not enforcing federal obscenity laws more aggressively, accusing shitty erotica of normalizing domestic violence, and calling out the American Library Association as a conduit for sexual exploitation. Fun folks! Here's a link to NCOSE's Thursday press conference announcing the anti-Amnesty International campaign, should you need help purging your lunch or anything.

NCOSE is joined in its opposition to sex-worker rights by a host of Hollywood celebrities, including Lena Dunham, Meryl Streep, and Anne Hathaway. Read more about their anti-Amnesty efforts here, and about the pushback from sex workers and human rights groups here.