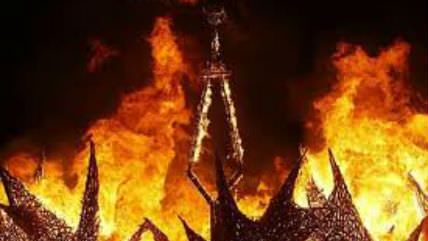 Reason Senior Editor Brian Doherty (that's me!) did a live stage show panel discussion regarding the Burning Man festival at the Upright Citizens Brigade Theater in Hollywood California the other week.

The audio of the event is now available via the technology of "Podcast," the Hound Tall podcast hosted by comedian and author Moshe Kasher.

Before or after listening, consider buying the book that got me the gig, now available in an e-book only 10th anniversary edition with a new 5,000 word afterword: This is Burning Man.

My first writing about Burning Man was in a February 2000 cover story in Reason magazine.