12-Year-Old Boy Suspended for Looking at a Girl. At Her Face. That's It.

At least he wasn't arrested. 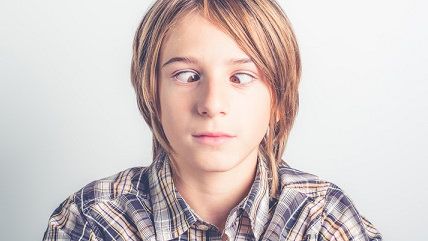 According to WLWT.com, the principal at St. Gabriel Consolidated School—a private institution—suspended a pair of 12-year-old boys for a day for playing a staring game with a female student:

Tolbert believes her son and another student at St. Gabriel were unfairly punished.

Tolbert said the boys got into a staring match with a female student last school year.

"He was playing a game with her. He said she was laughing. They were engaged. When she finally giggled and said stop. He stopped," Tolbert said.

The female student was cited in court papers as saying she also stared at the boys.

The relevant part of the school code gives administrators the power to suspend without hearing any student "whose presence possesses a continuing danger to persons or property or an ongoing threat of disrupting academic learning."

Fearing that the suspension would brand her son's permanent record with the mark of bullying and intimidating behavior, Candice Tolbert filed suit against the school. She lost the case earlier this week, but has considered appealing the ruling.

Students at private schools don't have the same rights as students at public schools, and St. Gabriel administrators have wider latitude to hand out punishments. The court's decision was probably the right one.

Even so, a one-day suspension for continuing a staring contest seems just a tad bit overboard. Why have school administrators lost the collective will to simply tell kids hey, knock it off, when they're doing something odd?