Hey Liberals, #IStandwithAhmed Isn't Only About Racism. It's About School Zero Tolerance Insanity.

Kids of all colors are at risk while paranoia reigns supreme in public schools. 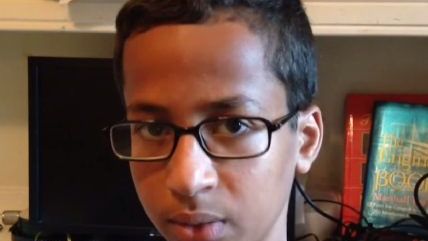 Irving, Texas, ninth-grader Ahmed Muhamed brought a harmless, homemade clock to school to impress his engineering teacher. But he made more of an impression on the police officers who slapped him in handcuffs, hauled him to the station, and accused him of perpetrating a bomb hoax.

As evidenced by Twitter—#IStandWithAhmed—everybody is on Ahmed's side (with the possible exception of his school's officials, who sent a letter home to parents alerting them to the non-incident). Even President Obama tweeted, "Cool clock, Ahmed. Want to bring it to the White House? We should inspire more kids like you to like science. It's what makes America great." His message was retweeted 200,000 times in the past three hours.

Who is Alex Stone? He's the South Carolina 16-year-old who was arrested and suspended last year for writing a purely fictional story about a dinosaur in which he killed the prehistoric beast with a gun. Stone was a white kid.

I bring up his race for one reason, and one reason only: Some are suggesting that Ahmed's race is the only reason he was treated so badly. This is the obvious, inescapable conclusion, according to many left-leaning pundits: school officials identified a kid with an Islamic-sounding name, saw him carting around a device he had built, and cried terrorist!

Mic's Jon Levine called the incident "anti-Muslim bigotry" and "hypocrisy," and implied that white kids routinely get away with far worse behavior. Vox's Zack Beauchamp put it this way:

It's hard to see this as anything but blatant, naked Islamophobia: Police surely would not have hauled off a white kid because of a clock.

This is a popular sentiment on Twitter right now—popular, but dead wrong.

Alex Stone is just one example. Here are some others:

And on and on. I would encourage anyone who thinks Ahmed never could have been arrested for bringing a clock to school if his name was John Smith to click the hyperlinks and read the stories, though the headlines say a lot on their own. Keep in mind that this is just a snapshot of the senseless zero tolerance arrests, suspensions, and expulsions suffered by white kids—these are stories I have written about, or could easily recall.

I don't mean to suggest that these kinds of things are horrible because they happened to white kids. They are horrible, period. But the idea that white kids are immune to mistreatment at the hands of cops and school officials is both false and dangerous.

I accept that it's perfectly plausible—if not yet definitively proven—racism played a role in the specific case of Ahmed Muhamed. And it's certainly true that poor and minority youths are at greater risk of mistreatment. Studies show schools discipline black and Latino kids more harshly and more frequently than white kids who commit the same offenses.

But it would be a grave mistake to zero-in on racism as the main problem here, because ridiculous over-enforcement of school disciplinary policies is only partly a race issue. No child is safe from having his or her rights' trampled by assertive cops at school as long as paranoia about school safety and petty rules outlawing perfectly safe, normal teen behavior remain in place. Cops arrest kids for bringing harmless toys that vaguely resemble weapons to school. Schools suspend kids for talking, writing, or merely just thinking about said weapons while on school premises, or near school premises, or even just near the bus stop on their own front lawns.

If cops made these arrests, and schools decreed these suspensions, in an entirely race-neutral and even-handed way, the arrests and suspensions would still be wrong. By all means, let's reduce racist enforcement of stupid authoritarian government policies, but let's not lose sight of the more important goal: the elimination of these policies, and the climate of paranoia about school violence that inspired them, altogether.