President Obama Just Said He Opposes Campus Censorship. Here's How He Can Prove It.

The president is the only foe of political correctness who can rein in the federal government. 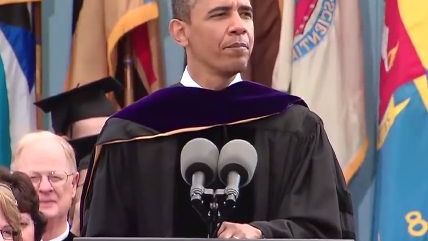 The plague of political correctness infecting every corner of life on American college campuses has grown so ubiquitous that even President Obama—by no means a conservative or contrarian on education matters—is bemoaning student-initiated censorship.

Here's what the president had to say about college students during a town hall discussion in Des Moines, Iowa, on Monday, according to Vox:

It's not just sometimes folks who are mad that colleges are too liberal that have a problem. Sometimes there are folks on college campuses who are liberal, and maybe even agree with me on a bunch of issues, who sometimes aren't listening to the other side, and that's a problem too. I've heard some college campuses where they don't want to have a guest speaker who is too conservative or they don't want to read a book if it has language that is offensive to African-Americans or somehow sends a demeaning signal towards women. I gotta tell you, I don't agree with that either. I don't agree that you, when you become students at colleges, have to be coddled and protected from different points of view. I think you should be able to — anybody who comes to speak to you and you disagree with, you should have an argument with 'em. But you shouldn't silence them by saying, "You can't come because I'm too sensitive to hear what you have to say." That's not the way we learn either.

Obama's use of the word "coddling" suggests that the president read Greg Lukianoff and Jonathan Haidt's recent Atlantic cover story on "The Coddling of the American Mind," which argued that students' penchant for avoiding conversations that troubled them was mentally unhealthy.

The Vox piece on Obama's comments is largely positive; it certainly doesn't criticize the president for observing that college students are too narrow-minded and censorship-driven. Perhaps that's not so surprising—Vox has actually run at least two pieces from professors lamenting that the preferences of a few irate students have made teaching much more difficult and less rewarding. Indeed, many on the intellectual left are supportive of the idea that college administrators are all-too eager to humor the demands of the hyper-offended minority.

But I'm skeptical that any amount of public pressure from intellectuals can inspire campuses to change so long as the federal government continues issuing guidance to universities that obligates them to censor. If Obama is actually opposed to the new scourge of political correctness on college campuses, he could prove his dedication to the cause by directing the Education Department to relax its relentless Title IX inquisition.

The president, after all, is the only foe of campus censorship who is in a position to do anything about it.