No one should die at a music event, government officials say while mulling options that would make that more likely. 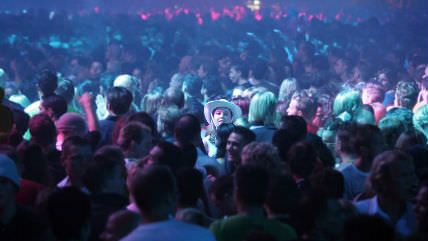 Yesterday the Los Angeles County Board of Supervisors voted, unanimously, to relaunch a task force on electronic dance music—first put together in 2010 when a 15-year-old girl died at a rave—after an 18-year-old and 19-year-old girl died last month of suspected ecstasy overdoses at a 65,000-person music festival in Ponoma.

"Ultimately, in the interest of public safety, a ban of electronic music festivals at county-owned properties remains a possibility that will continue to be evaluated," the joint motion by Supervisors Hilda Solis and Michael Antonovich reads.

The task force will include representatives from county counsel, the sheriff's department, public health, health services and the fire department, according to Solis.

"I want to emphasize that our efforts around this motion, above all, are about the health and safety of those attending these events," she said in a statement. "No lives should be lost while attending any music event."

Antonovich called for strong prohibitions on the festivals known for ecstasy-use.

"They should be alcohol free, no drugs allowed," he said of the festivals.

The newspaper found that while festival organizers appeared to implement medical and security recommendations made by the 2010 task force, "educational" initiatives hadn't done as well. It reports "at least" four deaths since 2011, including the two last month. Any given electronic dance music festival may have thousands of attendees. More people die on the way to raves, or to work or to school for that matter.

Were ecstasy and other "party drugs" legalized and sold openly, of course, it would be easier to prevent use by minors and contamination by some dealers. Politicians mulling bans on alcohol at dance music festivals, and even of the music festivals themselves, won't consider how the prohibitions they've put in place might be affecting the health and safety of electronic dance music fans.

It's nothing new. Joe Biden, whose still mulling a presidential run, is proud to have been there for the federal anti-rave push in the 1990s, after which ecstasy deaths increased. Bans on non-violent activities don't make them safer, and not just because it means the government is introducing violence into a non-violent thing—there are costs to not being able to acquire and do what you want openly because of prohibition. But maybe Joe Biden can meet the desire of progressives looking for a candidate to keep people safe from getting too turned up to dance music. As long as they're not banning the dance music for religious reasons.