No, a New Uber-Like App for Yellow Taxis Won't Save This Dying Industry.

Arro was designed to solve the problems of taxi drivers, not customers. 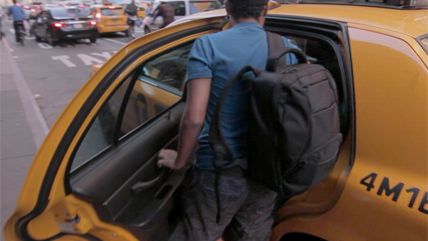 Here's a red flag that the developers of the smarpthone app Arro aren't destined to become the great saviors of the beleaguered yellow taxi industry: Mike Epley, the company's director of product managmeent, claims that not utlizing surge pricing is a competitive advantage that his company has over Uber.

The New York City-based Arro, which was profiled in Crain's New York Business on Thursday, is currently beta testing an Uber-like app for ordering a traditional yellow cab with a smartphone. Passengers will pay roughly the same regulated, metered fares that taxis always charge, but they'll be able to order them with their phones rather than sticking their hands in the air. (The Crain's article didn't mention if there will be an additional surcharge, or how Arro will make money, and the company didn't respond to my request for an interview.)

Surge pricing isn't designed for drivers to make occassional windfall profits; it's a mechanism for enticing them to head towards areas with cab shortages. Uber drivers see a map on their phones showing neighborhoods where fares have spiked because of supply shortages, and they gravitate towards them to make more money. Once the shortage is alleviated, the price goes back down. Without this function, Arro simply won't be able to deliver the quick service Uber customers rely on. So why would anyone use it?

And what happens if a yellow cab driver en route to picking up an Arro customer sees a hand waving in the air? Will he cancel the booking for the promise of a quick cash ride?

Sure, it might be cheaper to use Arro than Uber on New Years' Eve, or other high-demand holidays when surge pricing is the norm, but what are the chances of getting a quick cab pick up with Arro in Midtown Manhattan after the ball drops?

Arro's problem is that it was designed to solve the problems of taxi drivers, not taxi customers.

In New York City, where Arro will launch first, the ability to take street hails is still a advantage for the taxi industry over Uber in some situations because sticking your hand up on 42nd Street will still get you on your way faster than any other method. The problem the industry is facing is that there are too many yellow taxis to serve this limited purpose—and they each have a revenue-sucking license attached to them called a medallion.

For more on how Uber destroyed the value of New York City taxi medallions, and all the collateral damage, watch my recent Reason TV story, "Uber and the Great Taxicab Collapse:"