Get Ready for Drones Equipped with Tear Gas 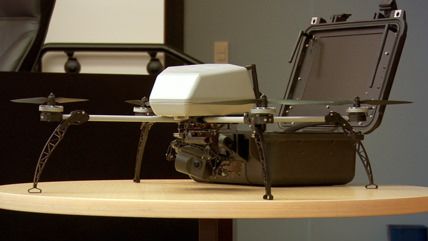 The good news is that the North Dakota legislature passed a bill this week requiring police to get a search warrant before they use a drone; The bad news is that drones could shoot rubber bullets, pepper spray, or even tear gas. From The Daily Beast:

Even "less than lethal" weapons can kill though. At least 39 people have been killed by police Tasers in 2015 so far, according to The Guardian. Bean bags, rubber bullets, and flying tear gas canisters have also maimed, if not killed, in the U.S. and abroad.

Becker said he worried about police firing on criminal suspects remotely, not unlike U.S. Air Force pilots who bomb the so-called Islamic State, widely known as ISIS, from more than 5,000 miles away.

Drawing up strict rules for use of any kind of police technology gives officers guidance as to how far they can go. Back in 2013, Trevor Timm, formerly of the Electronic Frontier Foundation, told Reason TV that it's very hard to draw those lines, though, because cops want to maintain their discretion. Once police have a certain power, they are never happy about relinquishing it.

"Police always seem to want to push the boundaries as far as the law will take them and sometimes over those boundaries," said Timm.

Timm pointed to law enforcement and cell phone data as an example. Back in 2012, The New York Times reported that law enforcement agencies made 1.3 million demands in 2011 of phone companies for subscriber data. Because there weren't strict privacy guidelines in place when mobile phones first entered the marketplace, it became easy for law enforcement to gather people's information without search warrants. For more watch, "Cops with Drones: Alameda Co., CA Weighs Technology vs. Privacy."