Watch Out for Drones with Pepper Spray in North Dakota

Law allows police to arm them with non-lethal weapons. 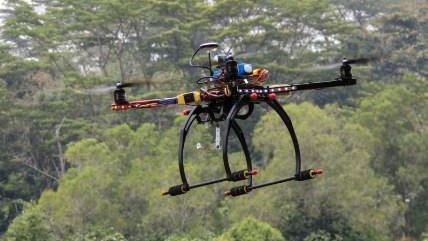 The good news is that North Dakota has passed a law requiring police to get a search warrant to use drones (unmanned aerial vehicles) for most private surveillance. The bad news is that the same bill also clears police to weaponize them with less-than-lethal arms, like Tasers or pepper spray.

Justin Glawe takes note at The Daily Beast in a much larger story about North Dakota's growing drone culture:

The bill's stated intent was to require police to obtain a search warrant from a judge in order to use a drone to search for criminal evidence. In fact, the original draft of Rep. Rick Becker's bill would have banned all weapons on police drones.

Then Bruce Burkett of North Dakota Peace Officer's Association was allowed by the state house committee to amend HB 1328 and limit the prohibition only to lethal weapons. "Less than lethal" weapons like rubber bullets, pepper spray, tear gas, sound cannons, and Tasers are therefore permitted on police drones.

Becker, the bill's Republican sponsor, said he had to live with it.

"This is one I'm not in full agreement with. I wish it was any weapon," he said at a hearing in March. "In my opinion there should be a nice, red line: Drones should not be weaponized. Period."

Some law enforcement officials, Glawe notes, complain that they shouldn't have to get a warrant for surveillance. The sheriff of Grand Forks County told him they need the unwarranted surveillance in order to get the evidence to bring to a judge in order to get a warrant in the first place. Glawe describes the police having a "trust us" mentality that they won't abuse their authority with drones, but he points out that police in North Dakota actually got the help of a Department of Homeland Security border drone without a warrant in order to track down a man accused of stealing cattle (how very North Dakota).

Glawe's full story is worth a read here. He also reports on the role of the drone industry in trying to push back against civil liberties protections out of fears it will somehow restrict "development" (as in opportunities to sell drones to law enforcement agencies).