Ohio Likely to Ban Abortion of Fetuses Diagnosed With Down Syndrome

Since such bans are largely unenforceable, the measure is more mechanism for pro-life political signaling than anything else. 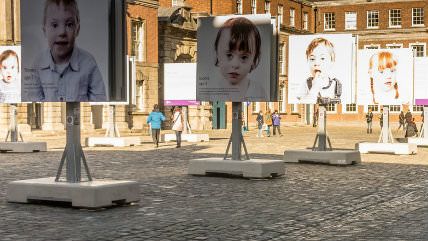 The Ohio legislature is likely to pass a law banning potential parents from choosing to abort a fetus that will be born with Down Syndrome, according to The New York Times. "The legislature is expected to approve the measure this fall because lawmakers endorsed by the National Right to Life Committee, which supports the bill, make up more than two-thirds of both houses," the Times reports.

State laws banning abortion based on specific motivation are not common, the Times notes. And in the few that have passed them—North Dakota, where it's illegal to abort based on fetal genetic anomalies (like Down Syndrome); Arizona, where doctor's can't peform abortions if the reaon is the "sex or race of the child, or the race of a parent of that child"—there's no evidence they're being enforced.

This is, at least in part, a matter of logistics: there's no requirement for women seeking an abortion to provide a reason why they wish to terminate their pregnancies. Thus laws like the one Ohio is trying to pass—which would prohibit doctors from performing abortions if fetal Down syndrome diagnosis is the stated reason—or the gender selective abortion bans passed by states such Arizona, North Carolina, North Dakota, and Pennsylvania, are more or less just another mechanism for pro-life political signaling (everyone's favorite election-season sport!).

Advocates are not aware of enforcement of any such laws in the states that have them. "They're trying to encroach on the right to abortion, step by step, and turn a woman's health care decision into an issue of discrimination against the fetus," said Sara Ainsworth, the director of legal advocacy at the National Advocates for Pregnant Women. "I can't imagine how any of these laws would be enforceable."

There have been no prosecutions under the 2013 North Dakota law, advocates on both sides say. Nor has the law changed anything at the state's only abortion provider, the Red River Women's Clinic in Fargo, said Tammi Kromenaker, its director.

David Perry, a freelance writer and father of a son with Down Syndrome, accused Ohio Republicans of using children like his son as "a wedge issue." A "blanket ban isn't going to help at all, but even if it's enforced somehow, it could just lead women to lie about the reasons they aborted, or make Down syndrome code for poverty, when only poor people are forced to give birth after a diagnosis," writes Perry. He argues that "the best way to get people to choose to carry a fetus with Down syndrome to term is to make the words 'Down syndrome' less scary" and "get to work building a more inclusive society." But, "that's hard. It's not politically useful. So instead, we've got bills like HB 131 in Ohio."