Another important win for due process in college sex disputes. 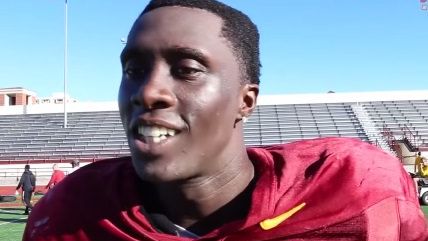 Bryce Dixon, a football player who was expelled from the University of Southern California for sexual assault, should resume classes and might be able to rejoin the team, a judge has ruled.

On Wednesday, Los Angeles Superior Court Judge Robert H. O'Brien barred USC from carrying out the expulsion on the grounds that the university's sexual assault adjudication process was miserably unfair to accused students.

"Judge O'Brien agreed with Bryce that USC's Title IX sexual misconduct investigation was unfair and lacks due process." said Mark Hathaway, attorney for Bryce Dixon. "USC's investigator acts as police, prosecutor, and judge. There is no hearing, no right to counsel, no rules of evidence, no presumption of innocence, and no right to confront witnesses. Courts are beginning to recognize the injustice imposed on students."

USC is still deciding how to respond, though it stands by its initial decision in the Dixon case.

Dixon, 18-years-old at the time of the incident, was accused of sexual assault by a fellow student who was four years his senior and worked as an athletic trainer for the football team. According to Dixon's petition to the court, he had two sexual encounters with the trainer in October 2014.  The first encounter took place in the trainer's room after 3:00 a.m.—both parties had removed their clothes and climbed into bed when Dixon began touching her in a sexual way. After about 10 minutes, the trainer said she wasn't feeling well—she had been drinking—and Dixon left.

Two weeks later, Dixon invited her over to his place to smoke marijuana. They had sex in his room. She was an active participant, according to Dixon's account. His roommate heard them and described it as a "normal-people-having-sex-thing."

Dixon was cleared of wrongdoing in the first encounter. But USC's Title IX investigator, Dr. Allee—who was invested with sole authority to learn the facts of the case and then decide its outcome—judged that Dixon could not definitively establish under the school's affirmative consent standard that the second encounter was consensual, even though the trainer (by her own admission) had never said "no."

Other details further complicate the narrative. For one thing, sex between players and trainers is frowned upon, and the trainer might have been worried that a consensual sexual relationship with Dixon would put her job at risk. She also had a boyfriend at the time.

Dixon's win in court comes just a few days after a judge reversed the expulsion of University of Tennessee wrestler Corey Mock, whose due process rights were similarly ignored during a sexual misconduct hearing. The judge in that case was particularly concerned that UT's affirmative consent standard imposed an improperly high burden of proof on Mock, the accused party.

Taken together, these developments in the Mock and Dixon cases are an encouraging sign for advocates of due process that the courts have a role to play in preventing the widespread adoption of "Yes Means Yes" as a legal standard for college sex disputes.