Why Does Cadbury Chocolate Taste Worse In America?

An overzealous FDA and a bitter trademark battle keep British expats from enjoying their favorite sweets.

Scott Shackford | From the August/September 2015 issue 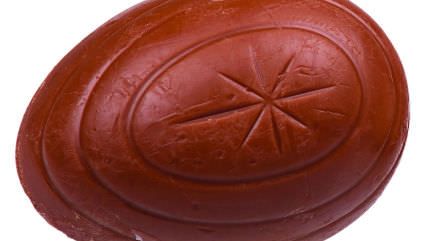 The average American probably knows Cadbury as the source of the sugar-rush-inducing Creme Eggs that hit grocery store shelves around Easter. But to the British, the company is known for so much more. Cadbury is a top chocolate manufacturer in the United Kingdom, with a host of popular treats for sale.

The rights to produce and distribute Cadbury products stateside belong to Hershey's, which bought out the British company's U.S. operations in 1988. But the chocolate made under the Cadbury brand in America is different from the chocolate made by Cadbury in the United Kingdom. Brits living in the states know it, and many of them don't particularly like it. They say the American version tastes "like shit" and "like spit-up," and even, in one case, that it smells "like stinky feet," according to an article in Vanity Fair.

Hershey's is less than pleased with the nasty descriptions British expats have been using. Contacted by Pennsylvania's Patriot-News, a company spokesman complained, curiously, that these subjective descriptions are "factually wrong." He said that Hershey's uses the same formula developed by Cadbury in the United States before the acquisition, and that the company sources many of its ingredients from Cadbury and has them shipped over from the British Isles.

Protests to the contrary notwithstanding, the ingredients in Cadbury chocolate items produced on opposite sides of the Atlantic are demonstrably different. One big reason for that is a regulation from the U.S. Food and Drug Administration (FDA). A layperson might think the subjectively superior flavor of British Cadbury bars comes from better cocoa or more milk. The secret is actually vegetable oil, which the FDA will not allow to be added to anything that will then be labeled "milk chocolate." In the U.S., only cocoa butter may be used. Not so in the United Kingdom.

In 2008, Hershey's actually changed some of its own chocolate offerings to taste more like Cadbury's, switching out cocoa butter for vegetable oil and altering the labels to comply with FDA demands. Some American candy critics responded with accusations that the company was trying to dilute the "definition" of chocolate and had made the change to save money. The website Consumerist called the resulting product "fake chocolate." Hershey's, back then, attempted to argue that consumers preferred the vegetable oil substitution—inadvertently previewing the point that fans of the original Cadbury products would end up arguing.

In any case, Cadbury chocolates produced in this country are not the same as those produced in Britain. As a result, there was a modest market in the United States for original, imported Cadbury products. But in early 2015, Hershey's successfully enforced its trademark, prohibiting importers from bringing British Cadbury products into the United States. From now on, your Creme Eggs will have to be locally sourced, so to speak.

Both The New York Times and Vanity Fair sought out the same British goods shop in their coverage of the chocolate war, Carry On Tea & Sympathy in Greenwich Village, New York. Store owner Nicola Perry was more than willing to express her distaste of the Hershey's version of the brand, telling The New York Times, "I'd never sell it in my store."

Outraged fans are signing online petitions and threatening a Hershey's boycott. But so far the company is digging in. Legally if not morally, Hershey's is in the right on two fronts: It owns the rights to distribute products labelled "Cadbury" in this country, and its milk chocolate offerings are in compliance with FDA strictures. Those imported from Britain, sadly, are not.