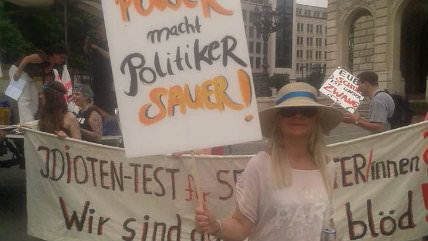 Sex workers around the world aren't taking lightly to a celebrity campaign against decriminalizing prostitution. Hundreds of sex workers, academics, social workers, and human-rights organizations have signed a letter in support of Amnesty International's position that "consensual sexual conduct between adults … is entitled to protection from state interference."

In response, the International Committee on the Rights of Sex Workers in Europe (ICRSE) drafted its own letter to Amnesty. "We are aware that Amnesty International will be pressured to back down from this position, but we urge you to show courage and tenacity and to adopt this policy," it states. "Sex workers worldwide are organizing and advocating, often in very precarious and dangerous contexts, for the decriminalization of sex work. Having Amnesty International take this position would make a significant contribution to promoting sex workers' human rights and protecting them from discrimination and violence."

The letter was signed by 180 advocacy organizations, including international groups such as the Global Alliance Against Traffic in Women, La Strada International, and The International Gay and Lesbian Human Rights Commission; American nonprofits such as the Sex Workers Outreach Project, the New York Anti-Trafficking Network, the National Center for Transgender Equality, and St James Infirmary; and an array of sex-worker rights and feminist groups from around the world, including the English Collective of Prostitutes, the Kenya Sex Workers Alliance, the Polish Federation of Women and Family Planning, Lady Mermaid's Bureau (Uganda), EMPOWER (Thailand), the Association of Hungarian Sex Workers, the Collective of Sex Workers and Supporters (Taiwan), the Sex Work Association of Jamaica, the Dutch Union of Sex Workers, and India's massive Durbar Mahila Samanwaya Committee. In addition to these groups, more than 600 individuals signed on to the letter.

Meanwhile, Open Society Foundations—the large, international do-gooder group founded by George Soros—is also urging Amnesty to "hold firm in its support of sex workers," and those who disagree to take another look at the issue. "The first thing that those who disagree with Amnesty's policy can do is listen to sex workers themselves," wrote Sebastian Kohn on the Open Society blog.

From South Africa to the United Kingdom, sex worker organizations … say that criminalizing sex workers or their clients serves only to fuel social stigma and to separate them from society, safety, and services. The global refrain from sex workers is clear: "Rights, not rescue."

[…] People often conflate sex work with trafficking, but sex work is consensual while trafficking isn't. Blurring the distinction between the two is a tactic often used to build opposition, with devastating impact on sex workers' rights.

On social media, too, sex workers and their allies have been speaking out: