The Short, Strange Trump-for-President Campaign of 1987

Are we living in an old Spy gag? 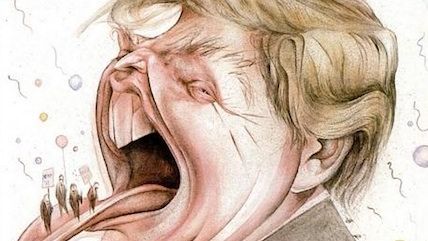 This is not the first year Donald Trump floated the idea that he might make a fine president. And no, his first time out wasn't in 1999, when he flirted with a run under the Reform Party banner. Way back in 1987, when Michael Dukakis was a mighty colossus striding across the land, this happened:

Trump soon showed up in New Hampshire, where he gave a speech to the Portsmouth Rotary Club. There he disappointed his friends in the Draft Trump Committee by announcing that he wasn't a candidate. Beyond that, he said the sorts of things he'd be saying when he did run nearly 30 years later—though he had to fill in the blanks with a different set of foreign villains:

He said the nation's economic policy could be vastly improved by following one simple rule: "Whatever Japan wants, do the opposite."

Trump, who got a standing ovation both before and after his speech, did not limit himself to Japan-bashing. He also went after Kuwait, Saudi Arabia and other countries that thrive under American protection but do not pay for it….

His solution is for America to tax its allies. That, he said, would solve the problem of the federal budget deficit. He was hazy about the details but said that details are what negotiations are for.

All this caught the eye of the folks at Spy, which was the closest we had to Gawker back then. The magazine loved to needle Trump, so it commissioned a poll and ran the results:

In case you were wondering who else appeared in the Spy survey:

So Biden and Trump are the last men standing. That sounds pretty bad, but it could be worse—in the universe next door, there's a tight race between Sam Nunn and Joey Buttafuoco.