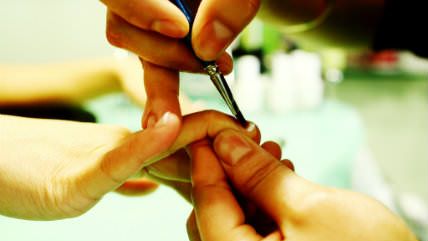 Yesterday I blogged about Richard Bernstein's New York Review of Books rebuttal of a two-part series on New York nail salons, published in May by The New York Times. The author of the series, Sarah Maslin Nir, and its editor, Michael Luo, have been responding on Twitter to Bernstein's criticisms. Luo, deputy metro editor with the Times, collected his tweeted responses on Storify here.

"Here's ad: $10/day 4 apprentice," Luo tweeted, with the image on the right here. Though some dispute he and Nir's translation of the ad, Nir says she didn't simply have it translated but confirmed the rate with workers. In any event, here's what they claim the ad "roughly" says:

The Times and Nir's supporters seem satisfied that this is an adequate rebuttal to Bernstein's criticism, which was that he and and his wife (who both speak Chinese) had combed months' worth of ads and not found what Nir described. In her piece, Nir mentioned one ad specifically, but implied that this is the norm in the nail industry:

Asian-language newspapers are rife with classified ads listing manicurist jobs paying so little the daily wage can at first glance appear to be a typo. Ads in Chinese in both Sing Tao Daily and World Journal for NYC Nail Spa, a second-story salon on the Upper West Side of Manhattan, advertised a starting wage of $10 a day. The rate was confirmed by several workers.

Nir also failed to specify that the $10-per-day rate is for "trainees," while manicurists and waxers with licenses get a base rate of $75 per day.

"Reporting confirmed that these apprentices/trainees were basically just beginners, doing the same types of jobs as others in the salon," Luo noted on Twitter.

Of course, that is often how apprenticeships/internships work. You can make a case that this is not how internships should work, at nail salons or The New York Times. But what Nir did is akin to taking the experiences of Times interns as representative of the pay and conditions for all New York state newspaper reporters.

As Bernstein noted, the narrative of wholesale injustice "is one of the most powerful and tempting in journalism." But real world narratives are rarely so neat, or quite as attention-grabbing.

It's a shame, because the experience of unlicensed Asian-salon apprentices is not itself insignificant. There is a story here—one that indicts both unscrupulous salon owners (of which, in an industry as big as New York's nail business, there are inevitably some) and the government licensing requirement that helps create this tiered work system. But there's pretty strong evidence that it is not the story of most manicurists in the state of New York. And for those that it is, ramping up government regulation and inspection will do more harm (in the form of direct interference from immigration officials or fewer legit salons willing to employ unlicensed workers) than it will good.

This has always been my main critique of Nir's first piece, that it failed to address how things like immigration policies and vocational licensing play a role in these workers' plight. There's too much detailing of things like the small, shared apartment in which salon-worker Jing Ren lives (a small, shared apartment is not exactly unheard of for many, many people new to New York City, including journalists) and not enough emphasis on the systemic. It just never scratchs beyond a surface-level narrative of evil-salon-bosses-exploit-powerless-workers.

When asked the story's biggest takeaway, Nir said: "There is no such thing as a cheap luxury. … The only way that you can have something decadent for a cheap price is by someone being exploited."

New York Times Metro Editor Wendell Jamieson said "we stand 100% behind our reporter," and he and Executive Editor Dean Baquet are working on a response.

The nail salon series isn't the only problematic piece Times editors had to address over the weekend. This morning, editor Margaret Sullivan issued an explanation about a story published late last week, "Criminal Inquiry Sought in Hillary Clinton's Use of Email."

"It wasn't really Mrs. Clinton directly who was the focus of the request for an investigation," wrote Sullivan. "It was more general: whether government information was handled improperly in connection with her use of a personal email account. Much later, The Times backed off the startling characterization of a 'criminal inquiry,' instead calling it something far tamer sounding: it was a 'security' referral."

"Competitive pressure and the desire for a scoop, led to too much speed and not enough caution," concluded Sullivan. "Reporting a less sensational version of the story… would have been a wise play."