Why Was the Border Patrol Union Going to Participate in Donald Trump's U.S.-Mexico Border Tour?

Should armed agents of the state be able to organize and use their power to influence politics? 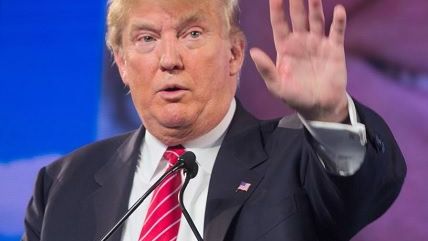 Today, Local 2455 of the National Border Patrol Council, the union for border patrol agents, said it was pulling out of Donald Trump's tour of the border. Though they won't say why, Trump's history of controversial comments might have something to do with it.

"After careful consideration of all of the factors involved in this event … it has been decided by Local 2455 to pull out of all events involving Donald Trump," the union said in a statement. "Make no mistake, our border with Mexico is not secure and there's no doubt that we need to have an honest discussion about that with the American people."

Trump still plans on visiting the border with other agents, his spokeswoman said, and will address a group of law enforcement officials at an event after the tour.

But why was Local 2455 considering joining Trump's tour in the first place? The union's advocacy of specific border policies is problematic. Permitting the unionization of armed agents of the state is questionable in and of itself. When those armed agents can turn around and campaign for policies—like a "safer border"—that would create more work for them and, in essence, enrich them, that illustrates the problem of public unions in general.

Border patrol agents are hired to patrol the border. As Americans, of course they have a right to a political opinion, but they should not have the right to use their government position—a position that's a privilege, not a right—to amplify their political opinions. That power, wielded by law enforcement unions and other kinds of public unions, distorts the conversation about policies by privileging positions that demand more government attention, resources, and deference, a vicious cycle that leads to more government intervention and more oppression under the guise of democratic participation.