The former Texas governor says the bloviating billionaire should apologize and quit the race. 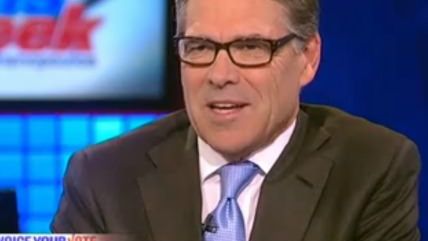 Former Texas Gov. Rick Perry seems to be carving out a niche for himself as one of Donald Trump's harshest critics among the Republican Party's presidential contenders. A few weeks ago, Perry called Trump's disparaging remarks about Mexican immigrants "offensive," declaring, "Donald Trump does not represent the Republican Party." On Saturday, after Trump glibly dismissed John McCain's ordeal as a prisoner of war in Vietnam, Perry called the bloviating billionaire's "repehensible" comments about the Arizona senator and former GOP presidential nominee "a new low in American politics" and urged Trump to end his clownish candidacy. "His attack on veterans make him unfit to be Commander-in-Chief of the U.S. Armed Forces," Perry said in a statement, "and he should immediately withdraw from the race for President."

Perry, an Air Force veteran, brought up the subject again at a candidate forum on Saturday night, saying Trump's comment was "as disturbing to me as [anything] I've heard in this entire process of running for the presidency of the United States." He added that Trump "doesn't understand or doesn't care about people who serve this country."

"As an individual who has worn the uniform of this country, I was highly offended by what Donald Trump said about John McCain and his years of sacrifice in a dirty, dingy, terrible prison in North Vietnam," Perry said. "Donald Trump owes every American veteran, and in particular, John McCain, an apology."