2 Reasons to Be Happy About the Iran Deal, and 1 Reason Not to Be

The good that will come out of this agreement cannot be overstated. But the agreement has a significant downside too. 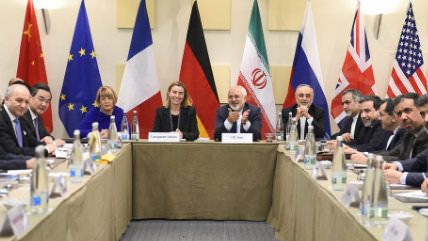 The nuclear agreement with Iran is good for two reasons: it reduces the chance of war, and it promises relief from sanctions for the Iranian people.

Although American officials still say that war is an option, the chance of it has now shrunk. Even Israeli Prime Minister Benjamin Netanyahu knows that his military alone cannot deal a death blow to Iran. For that he needs America, and he's far less likely to find a willing partner now.

That the Iranians will have sanctions lifted is something all humane people will welcome. President Obama says the sanctions "crippled the Iranian economy… Their economy has been cratering as a consequence of the sanctions." But he is wrong. "Economy" is an abstraction; it cannot be crippled or cratered. What has been crippled and cratered are the lives of innocent Iranians, who have had a difficult time obtaining food and medicines. The sanctions regime is a form of warfare against noncombatants. Moreover, as Gareth Porter shows, it did not even achieve what Obama says it was intended to achieve.

The good that will come out of this agreement cannot be overstated. The radically diminished prospect for war—which would set the Mideast aflame and inflict hardship on the rest of the world as well—and the improvement in the everyday lives of decent Iranians are causes for rejoicing.

But the agreement has a significant downside too, in that it reinforces American hegemony. It does so by the very fact that the U.S. government is regarded by the media and others as the legitimate prosecutor, judge, and probation officer of Iran's government. The U.S. government, of course, commands overwhelming military power, and in that respect alone it has the ability to impose demands on others. But that does not mean an American president has the moral authority to do so.

By what standard of a morality may a government make demands on others when it has wreaked death and destruction on countless societies with its military might, including the dropping of two atomic bombs on innocent Japanese noncombatants; launched wars of aggression; supported some of the worst dictators in recent times; made possible the use of death squads and other forms of terror; tortured people; overthrown governments (including Iran's in 1953) in order to install puppet regimes; underwritten aggressive wars (such as Iraq's war, complete with chemical weapons, against Iran in the 1980s; Israel's against Lebanon, which spawned Hezbollah; and now Saudi Arabia's war in Yemen); facilitated or waged covert, proxy, and cyber wars (e.g., against Iran); and backed the occupation of innocent people's land (most relevantly, Israel's occupation of Palestine through ethnic cleansing and military conquest, which spawned Hamas)?

Iran never threatened the United States or Israel. It has not tried to build a nuclear bomb, and even if it were to do so, the weapon would be of no value except perhaps as a deterrent. Yet the nuclear-armed United States, and its ally Israel—the Mideast's nuclear monopolist—haughtily presume to tell Iran what it may and may not do. The system of state sovereignty we suffer under is illegitimate, but as long as it exists, the U.S. government will only cause mayhem by violating the "sovereignty" of other nations. Under prevailing rules, Iran is a sovereign nation, so the U.S. government should have no more authority to demand that Iran open itself to inspections of its military and scientific facilities than Iran has to make that demand of the U.S. government. (Actually, maybe that wouldn't be a bad thing.)

It's especially outrageous for Israel, which has aggressed against its neighbors, to stand in judgment of Iran. Iran signed the nuclear Non-Proliferation Treaty and was subject to inspections before the latest negotiations. Israel has not signed the treaty. It won't even admit what has long been known: that it has hundreds of nuclear weapons, which were built with smuggled components thanks to the connivance of law-breaking American officials and supporters. Israel, like the United States, also opposes making the Mideast a nuclear-free zone, which Iran supports.

So lift a glass to the agreement. But let's not rest until the American hegemon is caged.