'This is what the vortex of evil looks like.' 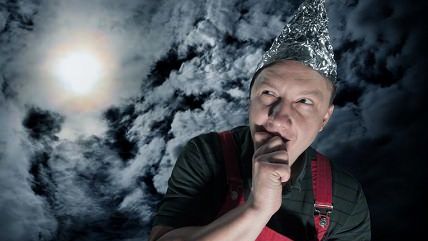 If you browse Salon at all these days, you have probably seen the headlines. "America's libertarian freakshow: Inside the free-market fetish of Rand Paul & Ted Cruz." "I was a troll on the white dude-bro Internet: The dark side of gaming, libertarianism, and guns." "My Personal Libertarian Hell: How I Enraged the Movement and Paid the Price." And on, and on, and on.

Are libertarians really that awful? That's the tongue-in-cheek question Playboy's Joe Donatelli intended to answer when he set out for FreedomFest in Las Vegas last week:

This is what the vortex of evil looks like. A well-dressed man onstage in a ballroom at Planet Hollywood is talking about investment in rare metals. Knut Andersen of Swiss Metals has come to the annual FreedomFest conference in Sin City to share investment opportunities with libertarians and other freedom-loving nuts.

Nuts? Oh, yeah. If there's one thing the political left and right in America agree on – strongly – it's these libertarians. They're the absolute worst.

Salon has called libertarians a "cult" and a "freakshow" and "crazy" and a "con" and a "scam" for "petulant children," and those are just some of the headlines it has used since 2014.

Slagging libertarians is so commonplace online that Washington Post criminal justice blogger Radley Balko keeps a running list of all of Salon and Alternet's libertarian headlines going back two years. It stands at 140 and counting.

Donatelli's full article—which pokes fun at the crazies while giving the non-crazies their day in court—is well worth a read. He concludes with some context from Cato Institute Vice President David Boaz:

"I don't want to drink raw milk, but some people do. I don't want to smoke marijuana, but some people do," Boaz said. "It's also true that a lot of Republicans still want to fly the Confederate flag, and only a few years ago it was the Democratic Party that put the Confederate flag on top of the South Carolina statehouse. Bernie Sanders looks at a world full of Venezuela and Greece and says, 'Let's be more like those countries.' Who are the crazies?"