When the Irish Improvised a DIY Banking System

Just try to order a Guinness in a regular bank. 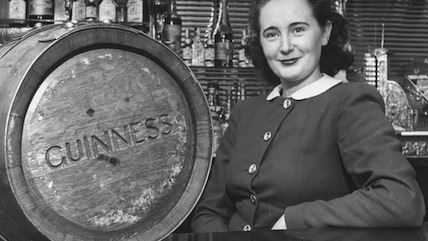 Patrick Cockburn remembers how the Irish got by while a strike shut down the country's traditional banks for six and a half months in 1970:

Undated cheques, often endorsed over to others but never cashed, became a form of currency. When the supply of cheques dried up, people wrote new ones on any available piece of paper, sometimes adding a postage stamp to give it an official appearance. There was talk of some cheques being written on beer mats and lavatory paper. It was a system that worked because it drew on local knowledge and trust. The people exchanging cheques and IOUs knew each other well, and if they did not, they could soon find the necessary information to assess each other's credit-worthiness. At that time there were 11,000 pubs in Ireland and 12,000 shops that became substitutes for the banks. Antoin E Murphy, who carried out a study on the strike's effects, found the public's ability to assess risk "was based on a vast pool of information available to transactors on the credit-worthiness of other transactors".

Indeed, their information was likely to be much better than a bank manager or his staff. The accuracy of their judgement was demonstrated when the strike came to an end with most pieces of paper turning out to be worth what was written on them. There were few insolvencies, the largest being a transport company called Palgrave Murphy, which was in trouble anyway. Overall, imports, which were expected to be badly hit, turned out largely unaffected.

Cockburn does note that "certain transactions, such as buying and selling property, became impossible or very complicated because essential documents proving ownership were locked in the vaults of strike-bound banks." His aim, he says, is to show that "the disaster that follows a bank shutdown is not total," not that "a home-grown people's banking system would grow up to replace commercial banks." But that home-grown people's banking system does sound rather more effective than you might expect.

Antoin Murphy's paper on the period can be read here. I enjoyed his brief account of how pubs came to take on some of the banks' old functions: "one does not after all serve drink to someone for years without discovering something of his liquid resources."