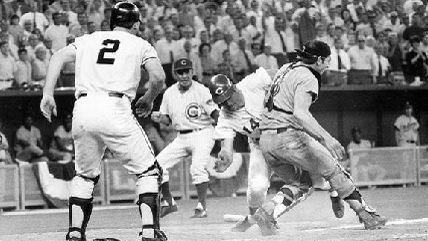 The 1970 Major League Baseball All-Star Game was, like tonight's version, held in Cincinnati, Ohio. It is memorable for one of the defining moments of Pete Rose's career as the Reds' "Charlie Hustle," a try-hard athlete who succeeded not through raw talent or genetic inheritance or being a "natural" but by ball-busting perserverance.

In the 12th inning, Rose rounded third and bowled over the American League catcher, Ray Fosse of the Cleveland Indians, in one of the greatest body slams in baseball history. Some fans and sportswriters marveled at Rose's intensity, whose physicality meant the National League won the exhibition game. But it's safe to say that most were turned off by the seriousness that Rose—who later admitted to betting on baseball and a host of other improprieties that earned him a lifetime ban from baseball—displayed in what is essentially a public-relations ploy that has no meaning to league play.

That negative feedback has only grown through the years, since it's widely assumed that Rose's tackle of Fosse cost the young catcher what would have been a brilliant career. As a widely reprinted AP story from this week puts it:

Fosse recalls it being 160 degrees on the artificial turf that night in Ohio, when the AL blew a 4-1, ninth-inning lead and lost 5-4 on Rose's run. Rose says Fosse left him no room to slide into home on the decisive play.

"He's the one blocking the plate without the ball," Rose said on Thursday. "I'm the one who missed three games with an injury to my knee. He played nine more years after that."

Two days after the All-Star Game, Fosse caught nine innings in a win at Kansas City. He couldn't lift his arm above his head.

"They didn't have the technology, I didn't see any of it, as far as X-rays, no MRI, not really anything," Fosse recalled in May at the Oakland Coliseum.

"Since my salary was about $12,000 at the time, nobody was going to tell me I couldn't play. Even though I was hurt and probably shouldn't have played, there was no injury that actually showed. It just was internal. As it turned out it was a fractured, separated shoulder. Things were different then."

I don't raise this story simply because I'm into baseball, live an hour outside of Cincinnati, think Pete Rose is a dick (though one who should be in baseball's Hall of Fame), and have read variations of the Rose-Killed-Fosse's career story all week long.

No, I raise the story and its uncritical repetition in the interest of media literacy. Just as with more-important stories about how Walter Cronkite ended the Vietnam War, Woodward and Bernstein toppled the presidency, and William Randolph Hearst started the Spanish-American War (all adeptly debunked by the great W. Joseph Campbell), the Rose-Fosse story is a classic case where a dubious version of the truth becomes hardened into fact.

We can learn how to become better consumers of media by taking less on faith and doing a bit more of our own investigations. This 2009 Deadspin article, for instance, presents a different interpretation of the impact of the Rose-Fosse smashup:

Yes, Fosse was hurt, but he never went on the disabled list and played 42 games in the second half. (As Rose loves to remind people, he missed three games with a bruised knee.) Playing hurt, there was a noticeable dip in his power, but the next season he went to the All-Star Game again and won his second Gold Glove. His average began to tail off the next two years (72-73), but he was still a full-time starter and a more than serviceable catcher for three full seasons after the original hit.

Fosse's career really went into a tailspin in 1974, after he had been traded to the Oakland Athletics. On June 5, Reggie Jackson, as was his wont, started a clubhouse brawl with teammate Billy North. Fosse attempted to break up the fight—and broke his neck in the process. He missed the remainder of that year, struggled mightily through the next three seasons and was done with baseball by 1977. That was the injury he never recovered from.

Reason interviewed W. Joseph Campbell about news myths in 2012. Take a look, especially if you think Walter Cronkite was as big a jerk as Pete Rose is: